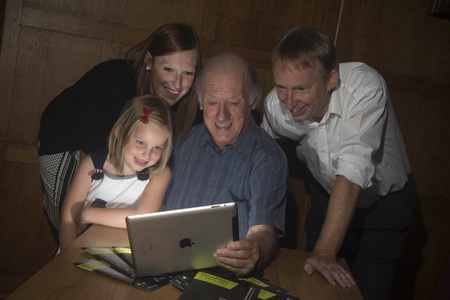 Aberdeen’s annual TechFest In September festival will return to the city on September 13, with a special 20-day programme of events, workshops and shows to celebrate its 20th birthday.

With a wide range of activities for all ages, the annual festival of Science, Technology, Engineering and Mathematics (STEM), is set to attract around 25,000 visitors between September 13 and October 2.

One of the aims of TechFest In September, which is supported by joint principal sponsors BP and Shell, is to engage young people in the four main STEM subjects and encourage them to go on to follow a career which utilises these skills by demonstrating that they are both fun and relevant in day to day life.

David Stuart (65), a retired scientist who has attended a record-breaking number of TechFest events, was joined by youngster Evie Gordon (4) to launch the public programme for TechFest In September 2013.

Booking opens this week for the new public programme, which has something for everyone - from loud and energetic shows aimed at children to thought-provoking lectures for adults, featuring everything from anthropology, zombies and climate change to comedy, brewing beer and beauty treatments.

The University of Aberdeen will be hosting a series of events, while new venues this year include Aberdeen Exhibition and Conference Centre, Café Drummond, the Cowdray Hall, the Belmont Cinema and Aberdeen Maritime Museum.

A free 20th birthday party will be held at Satrosphere on Saturday, September 21 from 10am to 4pm, with face painting, shows, Car Boot Science and space craft sessions.

Edwina Keown, deputy managing director of TechFest, said: “We are delighted to be back this year to mark our 20th birthday with 20 days of both new and favourite events, which are all intended to get visitors excited about science, technology, engineering and maths.

“Last year we ran the schools programme at the British Science Festival, which created a huge buzz around science subjects, so we are hoping to attract even more youngsters and adults than ever before.

“We have introduced a number of new events and venues this year and the public programme offers something for all different age groups and audiences, from the fun and light-hearted to thought-provoking presentations about topical subjects.”

She added: “We are indebted to the assistance we receive from all our sponsors and supporters, in particular our joint principal sponsors Shell and BP, whose ongoing backing helps us to continue to educate, entertain and inspire.”

Aberdeen Art Gallery will host the opening event on Friday, September 13 - An Evening of Discovery with Sue Black, Professor of Anatomy and Forensic Anthropology at the University of Dundee, which will start at 7.30pm.

The most senior forensic anthropologist in the UK, Sue was awarded a police commendation for her work in disaster victim identification training and is an advisor to the Home Office, Foreign Office and Interpol.

Other key highlights include a talk by BBC Radio 2 presenter Simon Mayo on his books Itch and Itch Rocks, about a science-mad, element hunting hero; an insight into the Science of Brewing with the team from Fraserburgh-based BrewDog; Sunday comedy nights; and the Daredevil Labs: Everest show on high altitude survival, hosted by BBC presenter Greg Foot.

The festival will get underway with a fun filled Activity Weekend, with 35 hands-on workshops and demonstrations at the Beach Ballroom and Beach Leisure Centre on Saturday and Sunday, September 14 and 15, sponsored by Marathon Oil.

The Discovery Series, sponsored by Nexen, offers a wide range of fascinating presentations, while the University of Aberdeen is also hosting a series of events over the three weeks.

Glen Cayley, Upstream Director U.K. & Ireland - Shell U.K. Limited, said: “Events like Techfest In September which aim to encourage enthusiasm for the fascinating world of STEM subjects are so important in inspiring the next generation of young scientists and engineers. We are proud to be a part of such an inspirational and exciting event which we consider to be a real asset to Aberdeen and the north east.

“Shell feels that by supporting TechFest-SetPoint we are not only investing in our own future but also investing in the future skills of our children.”

David Stuart, a retired biomedical scientist who has been attending Techfest In September for more than 10 years, was on hand to help launch this year’s festival.

He said: “I think Techfest gives older people access to new ideas in the science and technology fields, keep their minds active and stimulate them to explore new ideas of their own. The young people get to see, and are often given chance of hands-on experience, science which may stimulate them to form an interest which may develop into a university course and-or a career in the future.

“The advances that the young people will see in the future will be just as wonderful as the ones we have at present and just as unknown as they were to me 50 years ago when I started my working career.”

Dr Ken Skeldon, Head of Public Engagement with Research at the University of Aberdeen, added: “We are delighted to be supporting TechFest In September in its 20th year. The Festival provides our staff and students with a high profile channel through which to engage a range of audiences with our world class research.”