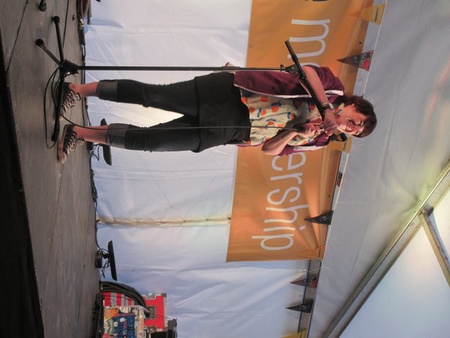 An academic who had never so much as cracked a joke in public until three months ago is about to perform her comedy act to a potential audience of hundreds at the Edinburgh Fringe Festival.

Nikki Cassie, 26, a University of Aberdeen PhD student, only got involved in stand up as part of a project that saw academics train to be comedians.

After a resounding success at her first show at a small club in Aberdeen in May, the obesity researcher is now set to perform at one of the biggest comedy festivals in the world.

“I thought the whole stand-up thing would be a one off,” explained Nikki. “I agreed to take part in Bright Club which sees researchers become comedians for the night with tutoring from professionals, and originally it was just because I thought it would be a good experience and a bit of fun. I thought if I can stand up in front of a room of people and start telling jokes, then I should never be afraid to give a lecture at a seminar ever again!”

After going down a storm at the Bright Club event, Nikki was asked if she’d be interested in taking on a few more shows.

“I played at Belladrum Festival in front of about 120 people which was great and next up is the Edinburgh Comedy Festival at the Fringe. It’s pretty mad that my third ever show will be at the festival. It feels surreal that people from all over the world may come see me perform.

“My show is based around my work which is in obesity and metabolic health – so I talk about how as a society we are absolutely obsessed with obesity and about the countless television programmes about eating and diets.

“I also talk about myself as a scientist and the stereotype that we’re all introverted and awkward!

“I feel I’ve learned a bit from both my performances and I’ve already changed some bits around to make it flow better, and hopefully get more laughs.

“Personally I like the comedy of Chris Ramsay. He does ‘nice’ comedy which I like. He isn’t cruel or overly crude and i hope like him people walk away from my act with a smile. In my show I like to take after Dylan Moran and perform with a pint of cider in my hand.”

Nikki’s not sure if she will take her stand-up career further but hasn’t ruled it out either.

“I’ve been asked to do some straight comedy shows but I don’t know if I want to try and be a ‘real’ comedian. At the moment I’m still under the guise of ‘scientist pretending to be comedian’ which I think takes some of the pressure off.”

Nikki will perform at the Edinburgh Fringe at the Assembly Rooms on Sunday August 18 at 3.45pm.