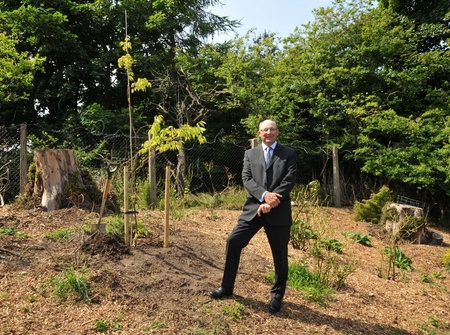 A promising young media studies student who died suddenly after suffering a brain haemorrhage will today (July 11) have a tree planted in his memory in the tranquil University of Aberdeen garden that his father looks after.

Cameron Walker - who wanted to become a film director - was just 21 when he passed away in Aberdeen Royal Infirmary almost three years ago.

The Robert Gordon University student - who had excelled in his studies and come top of his class - had been interested in Japanese culture and was keen to go to Japan.

Now his memory will live on with the planting of a Japanese Elm in a special Japanese-themed area of Old Aberdeen’s Cruickshank Botanic Garden - which had also been the location for the film Mime in a Can that Cameron had shot with his friends.

Cameron’s father Richard Walker, Head Gardener of the Cruickshank Botanic Garden, said: “Unless you have experienced the loss of a child, you can’t relate to what you go through. We lost Cameron suddenly and it has been absolutely devastating.

“Cameron was a fun-loving person who enjoyed life to the full, but had a dedicated, determined professional approach to his studies and his chosen career. The summer before he died along with a group of friends he walked the west highland way to raise money for CLAN.  He had ambitions to become a film director and go to Japan and then after that onto America.

“We lost a tree in the Cruickshank arboretum that blew over in a storm two Januarys ago and when we were discussing what to do, it was decided that we would create a Japanese area in memory of Cameron.

“We are planting a Japanese Elm that we have the full provenance of, and can trace right back to Japan, in an area of the arboretum that also now features a collection of Japanese plants.

“It’s a very quiet contemplative area that will be very special to us as a family.  We also hope that it will offer solace for others who have lost children. The area is away from the hustle and bustle of the city and all you can hear are the birds. You can also look onto St Machar Cathedral spires, which is a comfort, and also see the old Chanonry.

“Cameron did not get to go to Japan but we have brought Japan over to him. It helps give us hope for the future.”

The day of the planting will be doubly poignant for the Walker family. In the morning before the tree planting ceremony the family will hand over a prize in Cameron’s name – the Cameron Walker Par Excellence Award - to the best media studies fourth year student at the Robert Gordon University graduation that morning.

“Cameron, who was just starting his fourth year, did so well at RGU. He won best 3rd year student Award and had his media studies with honours degree bestowed posthumously.” added Richard.

“We decided to sponsor an award for the best media studies student in Cameron’s memory and this is the second year we have been able to do that. We wanted to do something that would help encourage the future generation of media studies students to believe that they could achieve something like Cameron would have achieved if he was still with us today.”