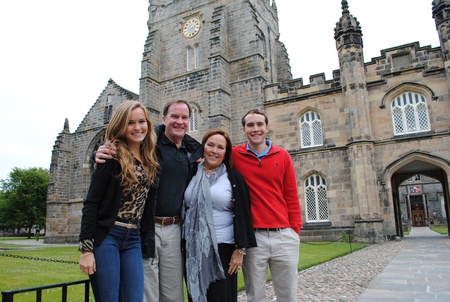 The Attorney General of the state of Michigan and former University of Aberdeen student, William ‘Bill’ Schuette returned to King’s College for the first time in almost 40 years on Wednesday.

Bill attended the University for a year in 1974/75 on his year of foreign study as part of his law undergraduate at Georgetown University in Washington DC.

Since then he has served as a Congressman in the US House of Representatives, a member of the Michigan Senate and as Judge on the Michigan Court of Appeals before being appointed 53rd Attorney General of Michigan.

Having spent an academic year in the North-east in his early 20s, Bill returned with his wife Cynthia and two children Heidi and Bill Jnr.

“We’ve been delighted to be here. It’s thrilling for me and my family has always encouraged me to come back. It’s nice that when last I was here I was just one Schuette but now I’m returning with four Schuettes! It’s been nostalgic,” he said.

“It’s been amazing seeing how the campus has expanded and the amazing Sir Duncan Rice Library facility you have here. The team in Aberdeen has been really gracious and helpful.”

When selecting a University for his year of study abroad, Bill settled on Aberdeen because it was one of the few institutions from which he could find an English-speaking Russian language professor. The transfer was set up by the American Institute for Foreign Study programme.

During his studies, Bill says he developed a taste for a local delicacy.

“I used to have a buttery every day after class with a cup of tea and the International Herald Tribune. The ladies who worked there got used to me as the ‘odd Yank’ who came in every day. Eventually when I came in they just said, ‘aye, here’s your buttery!’

“It’s going to be great retracing my steps up the old High Street and go to Hillhead halls which is where I stayed and I’m looking forward to popping in past the Machar Bar.

“What I really have vivid memories of was Seaton Park and all the daffodils that were always so beautiful. I’ve talked to my wife about that a lot!”

Bill’s wife Cynthia added: “Whenever Bill has spoken about Aberdeen it is always with great fondness. When we were coming into the city this morning on the train I saw him do something I’ve never seen him do before – he pulled out his phone and started taking photographs and that is so unlike him!

“Truly I think it holds a special place in his heart and he clearly had a great time here and he enjoyed the people of Aberdeen and I can see why because it’s just been lovely. And I’m happy we could come here because we’d not been able to picture what it was like until now.”

As an American in Scotland in the 1970s – Bill found himself a key member of the University’s basketball team.

“I used to play on the Aberdeen University basketball team and we used to jump on the train and travel to play games in Perth, Dundee, Edinburgh and the rest. There were three Americans – and we were all ringers! That was a great time. I really enjoyed it then and it’s been great coming back.”