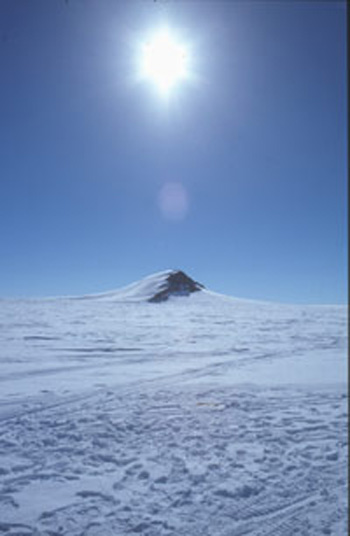 An international team of scientists, including an academic from the University of Aberdeen, has been given the go-ahead to explore one of the planet’s last great frontiers -an ancient lake hidden deep beneath Antarctica’s ice sheet.

Buried under 3 km of ice, the lake – the size of Lake Windermere (UK) – may have been isolated for hundreds of thousands of years and could contain unique forms of life.

Following the success in early 2008 of an International Polar Year project to map the extent and depth of subglacial Lake Ellsworth, the Natural Environment Research Council (NERC) is funding a consortium of multidisciplinary researchers from nine UK universities, the British Antarctic Survey and the National Oceanography Centre, Southampton.

During the next five years the researchers will acquire and develop the technologies needed for this ambitious project. During the 2012-2013 Antarctic winter season the research team will go 'deep field' into West Antarctica to sample water from the lake in the search for tiny life forms never before seen; and to extract sediment from the lake bed to find clues as to how the climate has changed over many millennia.

"This is a benchmark in polar exploration – our team will be the first to explore this ancient lake. It is a dark, cold place that has been sealed from the outside world and it's likely to contain unique forms of life. We hope to discover more about how life can exist in extreme environments and how Antarctica has changed in the past – which might help us understand more about other places on earth."

In such an extreme environment, the mere presence of life in itself would be a major scientific discovery, but there are very strong reasons to expect that such microorganisms would possess special or unique adaptations to this unusual and potentially hostile habitat.

David Blake, who is Head of Technology and Engineering at the British Antarctic Survey and is involved in the project, said:

"This project is a great scientific challenge and the technology required to drill 3 km through the ice without contaminating the lake is equally ambitious. Over the next few years we will build a hot water drill and probe, and make preparations to transport a sophisticated operation deep into the interior of West Antarctica. We really are at the frontiers of scientific exploration."

The exploration of subglacial lakes is part of an international effort to understand key global issues such as life in extreme environments and climate change.

Still images and graphics are available from: www.geos.ed.ac.uk/ellsworth and Neil Ross (neil.ross@ed.ac.uk)

Details of the five-year development of the Lake Ellsworth Exploration Programme can be found at www.geos.ed.ac.uk/ellsworth

The programme includes researchers from the following institutions:

The Scientific Committee of Antarctic Research (SCAR) set up a group of specialists called Subglacial Antarctic Lake Exploration (SALE) to consider and recommend mechanisms for the international coordination of a subglacial lake exploration program. Details of SALE's meetings and recommendations are available from http://salegos-scar.montana.edu/

Around 150 lakes have been discovered beneath Antarctica's vast ice sheet and so far little is known about them. Getting into the lake is a huge technological challenge but the effort is worth it. These lakes are important for a number of reasons. For example, because water acts as a lubricant to the ice above they may influence how the ice sheet flows. Their potential for unusual life forms could shed new light on evolution of life in harsh conditions; lake-floor sediments could yield vital clues to past climate. They can also help us understand the extraterrestrial environment of Europa (one of the moons of Jupiter).

Since the 1970s scientists have used radar, seismic and satellite technologies to discover over 150 lakes locked beneath Antarctica's vast ice sheets. The water beneath the ice remains liquid because of small levels of heat from the Earth's core coming up through bedrock and from the insulating effect of several kilometres of ice above. The largest and most well known of these is Lake Vostok on East Antarctica. The lake is thought to be roughly the size of Lake Ontario.

International Polar Year 2007–2008 is the largest coordinated international scientific effort for 50 years. From ice sheets and space science to Arctic communities and the creatures of the Southern Ocean, IPY includes more than 200 Arctic and Antarctic projects and harnesses the skills of 50,000 people – including scientists, students and support staff – from more than 60 nations. IPY is sponsored by the International Council for Science (ICSU) and The World Meteorological Organization (WMO).