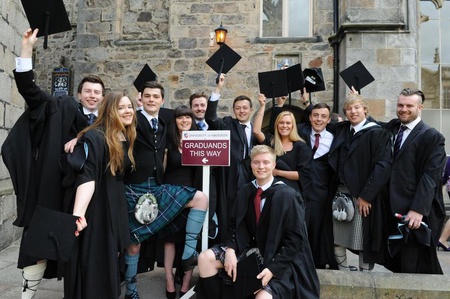 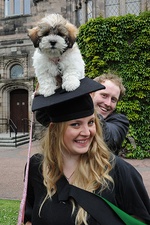 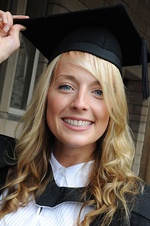 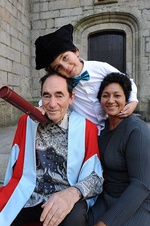 An anti-apartheid activist who lost an arm and was blinded in one eye in 1988 in Mozambique when South African security services planted a bomb in his car is among a host of high-ranking figures being given an honorary degree next week by the University of Aberdeen.

Human rights activist and lawyer Albie Sachs - who was appointed by Nelson Mandela as a judge on the nation's first Constitutional Court in 1994 - is among nine leading men and women being recognised by the University.

Graduands being honoured include astrophysicist Professor Dame Jocelyn Bell Burnell, who is credited with having made one of the most significant astronomical discoveries of the 20th century. As a postgraduate student Dame Jocelyn discovered the first pulsars, which are neutron stars that generate pulses of radiation and are the products of supernova explosions which make all life in the universe possible.

Honorary degrees are also going to academic lawyer Professor Terence Daintith, who pioneered the study of oil and gas law; Professor David Livingstone, who was given the OBE in 2002 for services to geography and history; former University of Aberdeen Secretary Steve Cannon, who has recently left Aberdeen for Hong Kong after helping guide the institution through dynamic times over the last 15 years; conductor and choral music conductor Ralph Allwood, who has provided choral music for many films, adverts and documentaries; James O'Donnell, Organist and Master of the Chorister of Westminster Abbey; Aberdeen graduate and African scholar Professor Emmanuel Obeng, who runs a scholarship scheme for talented students in Ghana; and former Vice-Principal of the University of Aberdeen Professor Dominic Houlihan, an eminent fish biologist who was at the University for 40 years, and who was instrumental in bringing the hugely successful British Science Festival to Aberdeen last September.

Professor Sir Ian Diamond, Principal and Vice-Chancellor of the University of Aberdeen, said: "I'm delighted to welcome into the University family so many distinguished faces, some new to us and others whom we have known for a great many years. All have achieved remarkable success in their fields and it is a privilege that they also want to be part of our great University."

More details of the honorary graduands and the times of their graduation ceremonies follow:

Terence Daintith is a distinguished academic lawyer. Professor Daintith, a law graduate of Oxford University, specialises in public law and has maintained a career-long interest in economic regulation, and pioneering the study of oil and gas law in the United Kingdom.

His recent research interests have included the operation of executive government under the British constitution, judicial review of contractual and administrative discretion, and the evolution of property rights in oil and gas in the United States and elsewhere.

He held a British Academy Research Readership for 1999-2001 and is currently the holder of a Leverhulme Major Research Fellowship (2011-2014). He was awarded an OBE in 2002 for services to Geography and History.

Wednesday July 3 at 11am

Professor Dame Jocelyn Bell Burnell, the distinguished British astrophysicist, is a graduate of the Universities of Glasgow and Cambridge.

Dame Jocelyn made one of the greatest astronomical discoveries of the twentieth century. As a postgraduate student, she discovered the first radio pulsars - the products of supernova explosions which make all life in the universe possible - with her thesis supervisor Antony Hewish. Since leaving Cambridge in 1968 she has studied the sky in almost every region of the electromagnetic spectrum and gained an unusual breadth of experience.

She became a full-time professor at the Open University in 1991 and was Dean of Science at the University of Bath between 2001 and 2004. Professor Bell Burnell directs many of her efforts towards the advancement of astronomy and is deeply involved in teaching and public understanding of physics and astronomy. For several years she was Chair of Particle Physics and Astronomy Research Council's Public Understanding of Science and Technology Advisory Panel and has regularly undertaken overseas tours for the British Council.

Dame Jocelyn was president of the Institute of Physics from 2008 to 2011 and received the 2010 Michael Faraday Prize and Lecture from the Royal Society in recognition of her excellence in communicating science.

She is a champion of women in science and has campaigned to improve the status and number of women in professional and academic posts in the fields of physics and astronomy.

She is currently a Visiting Professor of Astrophysics at the University of Oxford and a Fellow of Mansfield College.

Steven (Steve) Cannon has served as Secretary to the University of Aberdeen for fifteen years.

Steve Cannon was invited to join the Scottish Higher Education Funding Council as its Secretary and Director of Finance, Strategy and Corporate Affairs in 1996. He joined the University of Aberdeen in 1998 as Secretary and Director of Operations and has been a constant member of the senior management team that has steered the University through some of the most dynamic years of change in the institution's recent history.

His external appointments and contributions have been many. For example, he served on the Steering Committee of Enhancing Learning and Research in Humanitarian Assistance and on the boards of the Universities and Colleges Admissions Service (UCAS) and the Institutional Management of Higher Education programme of the OECD. A member of Universities Scotland's International Committee, Mr Cannon is a former adviser to the Ministry of Education in Ethiopia and the Tertiary Council of Mauritius.

In 2013 Steve Cannon was appointed Executive Vice-President (Administration and Finance) of the University of Hong Kong.

Having been Precentor and Director of Music for 26 years at Eton College, he left in 2011 to be freelance and co-found Inner Voices, a choir for forty young people from ten Inner London state schools. He featured in the Channel 4 documentary 'A Boy called Alex', has made 35 live broadcasts on Radio 3 and recently appeared as a choral consultant and judge in BBC2's The Choir: Sing While You Work.

His commercial choral music for adverts, films and documentaries has been played worldwide and he has made 26 choral recordings. Additionally, Ralph Allwood is a judge for the Llangollen International Eisteddfod and the Cork International Choral Festival and is a regular visitor to several Welsh choirs, including the National Youth Choir of Wales. As a Choral Consultant he regularly visits Durham University, Queens' College (Cambridge), Trinity College (Oxford), the Malcolm Arnold Academy and Wellington College.

In 2002 he was made Honorary Fellow of the Royal School of Church Music, in 2003 an Honorary Associate of the Royal Academy of Music and an MBE in the 2012 New Years' Honours. He is a Fellow Commoner at Queens' College, Cambridge and an Honorary Fellow at University College, Durham. In 2012 he took up the post of Director of Chapel Music in the Old Royal Naval College Chapel in Greenwich.

Justice Sachs' career in human rights activism began when, as a law student at the University of Cape Town, he took part in the Defiance of Unjust Laws Campaign. As a young advocate at the Cape Bar, the bulk of his work involved defending people charged under racist statutes and repressive security laws. Many faced the death sentence. He himself was subjected to banning orders restricting his movement and was eventually placed in solitary confinement without trial for two prolonged spells of detention. In 1966 he went into exile.

After spending eleven years studying and teaching law in England he worked for a further eleven years in Mozambique as law professor and legal researcher. In 1988 he was blown up by a bomb placed in his car in Maputo by South African security agents, losing an arm and the sight of an eye. After recovering from his injuries he devoted himself full-time to preparations for a new democratic Constitution for South Africa.

In 1990 he returned home and as a member of the Constitutional Committee and the National Executive of the ANC took an active part in the negotiations which led to South Africa becoming a constitutional democracy. In 1994 he was appointed by President Nelson Mandela to serve on the newly-established Constitutional Court.

In addition to his work on the Court, he has travelled to many countries sharing South African experience in healing divided societies.

James O'Donnell, Organist and Master of the Choristers of Westminster Abbey, was born in Scotland in 1961. He won a junior scholarship in organ and harpsichord at the Royal College of Music while still at school, and was then elected organ Scholar of Jesus College, Cambridge, where he also held an open scholarship to study Music.

At Cambridge he won several academic awards and prizes and graduated with first class honours. He studied the organ with Peter Hurford and Nicolas Kynaston, and latterly with David Sanger. On leaving university in 1982 he was appointed Assistant Master of Music at Westminster Cathedral; he was then Master of Music from 1988 to 2000.

James O'Donnell has developed an international reputation as an organist. He has given recitals in Britain, Europe, the United States and Australasia, as well as having made solo appearances at the Proms and broadcast many times on BBC Radio 3. In 1987 he won first prize in the competition for the Royal College of Organists' Performer of the Year award. He has worked as a conductor with many distinguished groups, including the Orchestra of the Age of Enlightenment, Florilegium, the BBC Singers, the City of London Sinfonia and the Hanover Band. He has appeared as a soloist and continuo player in recordings and concerts with many leading period-instrument ensembles, notably The King's Consort and the Gabrieli Consort and Players.

Between 1997 and 2004 he was Professor of Organ at the Royal Academy of Music, where he is now Visiting Professor of both Organ and Choral Conducting. A long-term member of the Council of the Royal College of Organists, he has just completed a two-year term as its President.

A Professor in New Testament Studies at The University of Cape Coast since 1997, Emmanuael Obeng was ordained into the Presbyterian Church of Ghana in 2000. He has also held a chair at Moi University, Eldoret, Kenya and had been a Senior Lecturer at the University of Ilorin, Nigeria. The effect of Reverend Professor Obeng's leadership on the University of Cape Coast was transformational. It is now regarded as one of Ghana's leading Public Tertiary Institutions. A major student hostel, accommodating over a thousand students, has been named in his honour. He is popularly called, in one of the local Ghanaian dialects, "Osiadan" - which translates as "The Builder". This reflects the numerous building projects undertaken during his tenure as Vice-Chancellor.

He currently has a Scholarship scheme for needy but brilliant students from the Agona District.

Professor Dominic Houlihan retired in September 2012 following a distinguished career spanning some forty years with the University. An eminent fish biologist, he was also one of the longest-serving Vice Principals in recent times.

During his career he served as Vice Principal (Research & Commercialisation), Vice Principal & Dean of the Faculty of Science & Engineering, and as Head of the Department of Zoology.

An enthusiastic champion of entrepreneurial activity, he also forged international links with China, Hong Kong and the Middle East. His advocacy of public engagement in science was recognised with an OBE in 2010, and he was Senior Academic Lead for the hugely successful British Science Festival hosted by the University of Aberdeen in September 2012.