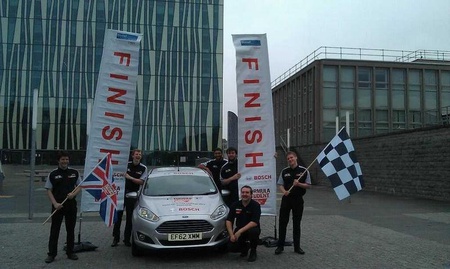 Aberdeen engineering students have completed part of a non-stop 1,700 mile driving challenge across the length of Britain in a bid to be crowned the nation’s most economical drivers.

The Formula Student Diesel Eco driving Challenge started on June 18 and travelled via 46 universities, starting in London and ending at the Sir Duncan Rice Library at the University of Aberdeen on Friday morning.

The car was driven from each university by a student and handed over to another driver at the next institution.

Monitoring equipment analysed the efficiency of each team’s driving with three awards up for grabs for the most economical drivers for city, rural and highway driving.

All participants are members of the Formula Student competition, which sees engineering students design and build their own single-seater racing car.

Simon Esslemont, from the University of Aberdeen, was behind the wheel for the final leg from Dundee to Aberdeen, arriving at around 8am this morning.

“It was great to be part of this inaugural competition which aims to raise the profile of economical driving. It was a great effort by all my fellow students involved and sets us up nicely for the main Formula Student event at Silverstone in July”, he said.

Jon Hilton, chairman of Formula Student said: “This is a fantastic challenge which has certainly prepared the students for July’s competition.

“Driving efficiency is a major part of Formula Student and it will be very interesting to see the results of the Bosch Diesel Eco Challenge.”

Formula Student celebrates its 15th anniversary this year. The event runs from 4-7 July at Silverstone, where the results of the Eco driving challenge will also be announced.