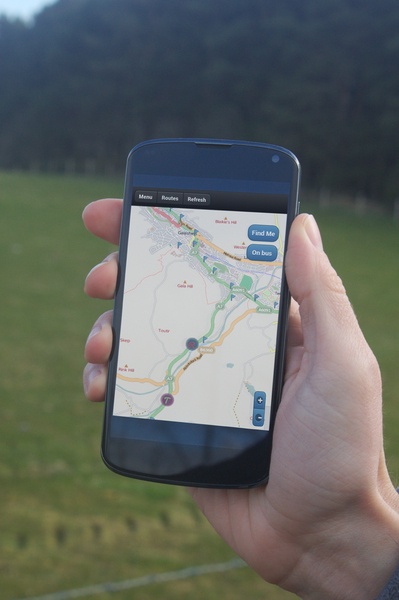 The effects of bus delays caused by bad weather or road accidents could soon be greatly reduced thanks to a new phone app powered by public transport users.

Researchers at the dot.rural Research Hub at the University of Aberdeen have released ‘GetThereBus’, an app that aims to improve bus travel for rural customers, particularly during disruptions.

Bus operators in recent years have made significant investment to improve the level of information it can provide to passengers during bad weather.  Unfortunately, delays and cancellations do occasionally occur and in rural areas, real time information is not always available.

The University of Aberdeen has developed an app to improve information around bus services, particularly real-time information, which it hopes will prove invaluable for customers, especially during disruptions.

The app allows passengers to anonymously share their location when travelling on public transport.  This is used to let others know where the bus is, much like you might currently do by texting a friend, except using the app, everyone benefits. The more people actively using the system, the better it will be for everyone.  Even when no-one is sharing information, the app still provides location estimates based on the timetable.

The app is being developed in partnership with First Scotland East’s operations in the Borders.  Operations Director, John Gorman, said: “We’ve been working closely with the dot.rural Research Hub over the last few months and are pleased to be playing a part in the development of such an innovative product.  We recognise that new technology such as the ‘GetThereBus’ app has a crucial role to play in the future of bus travel – I’m delighted that we are at the forefront of that research.

Director of dot.rural, Professor Peter Edwards, who is leading the research, said: “From talking to people in the Borders, we anticipate this app will be particularly useful during disruptions or bad weather. We believe that by using the travelling public to provide information, it will help others in the community to better plan their own journeys.”

The Android app is initially available for the X95/95/95A, 62/62A, 72, 73, 396 and 397 routes in the Scottish Borders covering an area of over 2000 square miles, with new routes and features being added in response to user feedback. For more information and to download the app visit http://www.gettherebus.com.

The more people who use the app, the more effectively it works and informs bus users so researchers are encouraging bus users on the testing route to download the app and try it out.

The  dot.rural research hub, a digital economy research centre at the University of Aberdeen funded by a five year £11.8 million grant from the Research Councils UK Digital Economy Programme and which began work in October 2009. Rural areas have specific characteristics that create challenges around issues such as quality of life and wealth creation. We believe that rural areas of the UK can, through the user-led application of digital technology, be more economically, socially and environmentally sustainable. Our aim is to harness the Hub's expertise with a range of partners to realise thisambition.www.dotrural.ac.uk

The GetThere app has been developed by the dot.rural Digital Economy Hub, University of Aberdeen in partnership with First Group, Borders Council and Borders College.