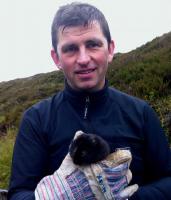 The science behind evolution of inter-family behaviour, and the lessons we are learning from the animal kingdom on population regulation will be discussed at Café Scientifique (Aberdeenshire) tonight (June 11) at the The Acorn Centre in Inverurie.

The discussion, which is the last in the 2013 Café Scientifique (Aberdeenshire) series is aimed at a general public audience. It will be led by internationally recognised ecologist Professor Xavier Lambin, from the University of Aberdeen.

Professor Lambin said: “There are many processes that cause fluctuations in the size of populations of a wide range of animal species, including the endangered ‘lonely-heart’ water voles. My research explores the risky behaviours, which are shaped by evolution, behind population control in the animal kingdom.

“At Café Scientifique, I will introduce some of the intriguing patterns found in the natural world involving the ubiquitous behaviour of different animal’s species when leaving the family home. In all species, many youngsters leave home and take the chance the find a better place to make their life, despite all the dangers they become exposed to.  I will discuss how this risky behaviour has evolved under natural selection, and why it is crucial for survival, despite the dangers.”

The event, entitled Why Youngsters Should Leave Home One Day, is set to be an informal and thought-provoking night offering plenty of time for questions and discussion. The talk begins at 7pm and is free to attend. Full details of this and other programmes in the series can be found at www.engagingaberdeen.co.uk. Cafe Scientifique is supported by a science engagement grant from the Scottish Government.