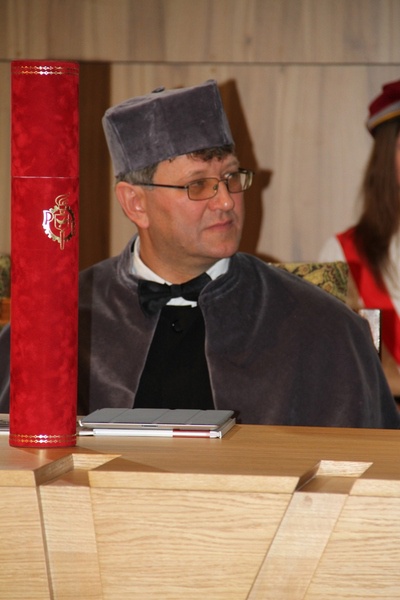 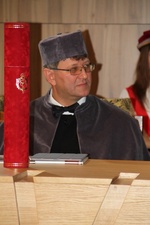 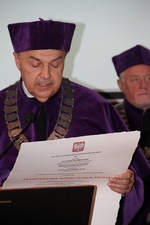 Professor Marian Wiercigroch FRSE has been awarded the degree of Doctor Honoris Causa by Lodz University of Technology (LUT) in Poland, joining an elite group of leading scientists and political dignitaries who have been honoured by the Polish university.

Professor Wiercigroch holds a Sixth Century Chair at the University of Aberdeen, where he is also Director of the Centre for Applied Dynamics Research (CADR) and a Director of Internationalisation at the College of Physical Sciences.

The ceremony in Lodz on 8 May was attended by the local academic community and representatives from most universities across Poland.  LUT is one of Poland’s leading universities, with a nonlinear dynamics group which belongs to the best in the world and has strong connections to Aberdeen’s CADR.

The ceremony was conducted by his Excellency, the LUT Rector, Professor Stanislaw Bielecki and the Vice-Rector for Science, Professor Piotr Paneth. The Promoter was Professor Tomasz Kapitaniak, who leads the nonlinear dynamics group.

The certificate which is written in Latin and Polish was read in both languages by the Dean of Mechanical Engineering Faculty, Professor Bogdan Kruszynski. The citation on the certificate says ‘to a great scientist and an international authority in the area of nonlinear dynamics and its applications, a man of great intellect and integrity, and an initiator many of successful collaborations with the Lodz University of Technology.’

Professor Wiercigroch said: “I was completely overwhelmed first when I heard about the prospect of being awarded this highest honour a University can bestow, and then by the truly magnificent graduation ceremony itself.”

Professor Sir Ian Diamond, Principal and Vice-Chancellor, expressed his congratulations and pride on behalf of the University of Aberdeen, saying: “The awarding of this degree to Professor Wiercigroch is of course a great accolade for him personally, recognising his excellent academic achievements. It’s also a tremendous honour for our University. Such awards demonstrate the global nature of the academic community of which we are all a part, and the mutual respect and regard which join us together. It is a tribute which we greatly appreciate.”

A recording of the graduation ceremony is available here on the LUT website.