First ever May Festival hailed a huge success
14 May 2013 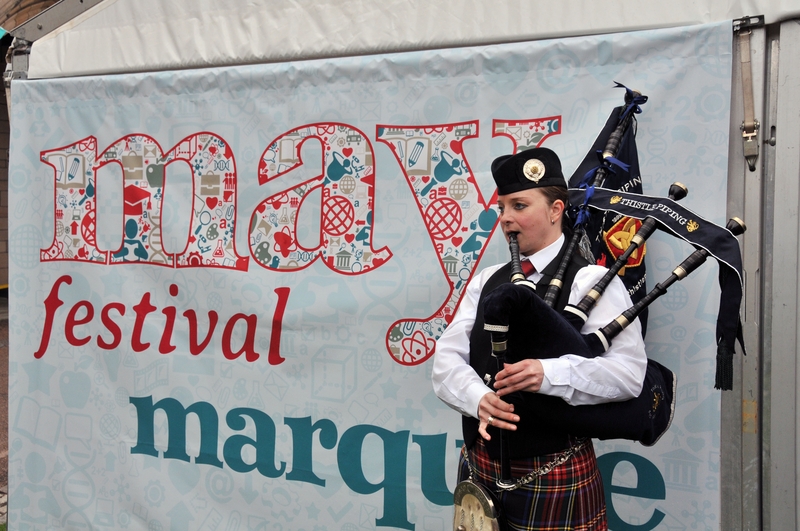 Thousands of people descended on the University of Aberdeen at the weekend (Friday, May 10 - Sunday, May 12) for the first ever May Festival.

The festival, which featured the likes of TV presenter Dr James Logan, Dame Emma Kirkby and celebrity chef Nick Nairn, staged more than 100 events over the weekend highlighting a wide variety of themes.

Encompassing seven different strands; Word, Food and Nutrition, Discover, Music, Science, Gaelic, and Film, there really was something on offer for everyone.

The Festival was also attended by representatives from global petroleum and chemicals enterprise, Saudi Aramco, which was the principal sponsor of the May Festival.

Nabil Aldabal, Managing Director of Aramco Overseas Company, an affiliate of Saudi Aramco, headquartered in Europe said: “Saudi Aramco is pleased to have partnered Aberdeen University as lead sponsor of the May Festival, which proved to be a culturally enriching few days.

“Aberdeen is a major hub for oil and gas in Europe and the University an important partner going forward, especially now that we have opened the Aberdeen Technology Office dedicated to upstream research.”

In addition to the festival’s main programme, the Marathon Oil School and Children’s programme proved hugely popular, with youngsters from across the city and Shire visiting the campus to enjoy the festival.

The weekend drew to a close with an all-singing-all-dancing Variety Show, which saw some of the University’s finest talent take to the stage before bringing the curtain down on the festival.

University of Aberdeen Principal and Vice-Chancellor, Professor Sir Ian Diamond, was delighted to see so many members of the public and University community enjoying the wide range of events on offer.

He said: “One of the key aims of the May Festival was to engage with the wider community and give them the opportunity to get a taste of what all goes on at the University, and this was reflected in the various festival themes.

“With such a diverse programme on offer, the festival was designed in such a way as to offer something for everyone, for all ages and interests. It was tremendous to see so many members of the public from across the region come along to the festival.

“I would also like to take this opportunity to thank all of our festival sponsors and supporters, who helped to make the May Festival the hugely successful event it was.”