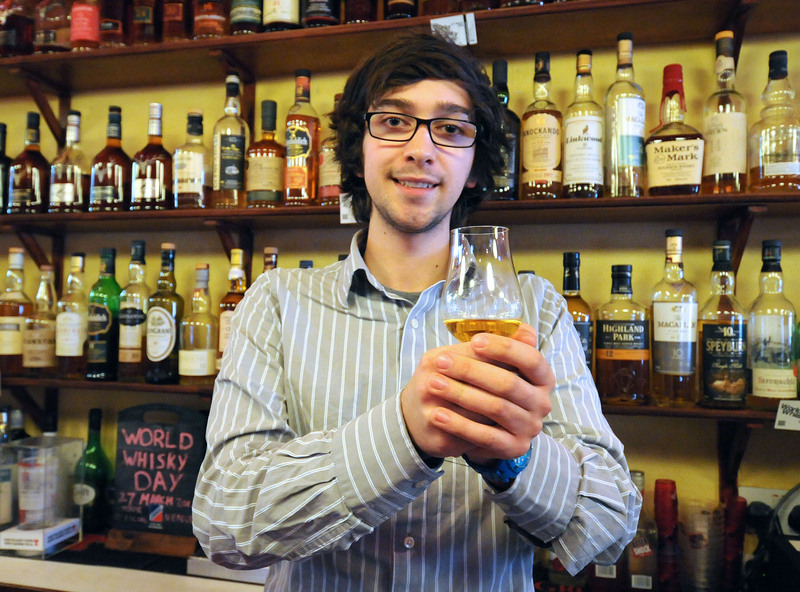 Last year he was an unknown Aberdeen University student with a bright idea – this year he is 'Mr World Whisky Day' and industry representatives are beating a path to his door.

When Blair Bowman, 23, came up with the idea of creating a day of celebration to toast Scotland’s national drink and major export he could never have dreamt it would prove so popular.

The Hispanic Studies student found himself being hailed as one of the country’s brightest young entrepreneurs as his creation prompted more than 20,000 people to attend one of more than 200 whisky events held in 30+ countries as far afield as Kuala Lumpur to New Zealand and Alaska to Argentina.

Since then the idea and the brand have gone from strength to strength and ahead of this year’s event www.worldwhiskyday.com (Saturday May 18) he shared the life-changing effects it has had on him.

“Last year I was thinking, I must start getting a CV together for when I finish my degree and this year people have been sending me their CVs wanting to come and work for World Whisky Day!” Blair said.  “I’ve had guys from Hong Kong and Australia getting in touch asking if there are job opportunities. It’s just mad.

“After I finish my studies World Whisky Day is going to be my full-time job. I really believe it has such massive potential that it will be a viable business and I’m so excited about it.

“I’ve been getting recognised a lot more as well, in public but also within the Scotch Whisky industry which is great. I suppose last year I might have been dismissed by some in the business as just some young guy with no clue but now distributors and distilleries are seeing the potential that the event has and they’re keen to be involved.”

Indeed whilst Blair was begging and borrowing to get the event off the ground last year, this time around established firms have come to him to offer support and discuss joint promotional opportunities.

“Last year the website couldn’t cope with the traffic it received on the day but this year cloud computing firm iomart got in touch to offer a dedicated server so the site won’t go down this time,” he explained. “BrewDog contacted me and they’re planning to do some taster events at their bars across the UK on the day and also the Scotch Malt Whisky Society in Edinburgh and London, which are usually members-only clubs, will be open to the public which is just fantastic.

“I’ve been overwhelmed by the response in terms of people’s passion to celebrate our national drink but also by the industry to get onboard and get involved and to grow its reputation.

“I think distilleries are seeing it as a good opportunity to all come together under an independent umbrella group which can be mutually beneficial for everybody. And as they get involved, they’ll be able to influence and decide the direction of how the event should evolve.”

With well over 100 events already confirmed worldwide for World Whisky Day 2013, Blair is confident this year’s celebration will top the inaugural event

“This year we have events in every continent – except Antarctica. That would be great if we could get something happening in Antarctica! Someone tweeted us to say they were coming over to Scotland from Perth in Australia to celebrate World Whisky Day, which is almost difficult to comprehend but it shows how far the name has reached already”.

Blair’s achievement is made all the more impressive by the fact he has overseen its birth and development whilst still juggling his University studies. Though he can’t say it hasn’t affected his coursework – he managed to make whisky the subject of his Hispanic Studies dissertation by focussing on the historical links between sherry and whisky.

He said: “I’ve got three essays due in the day before World Whisky Day and an exam the day after, so it’s definitely been a challenge studying as well as everything else.

“Obviously I’m excited about this year’s event but I hope to make 2014 a really big one as I’ll be able to give it my full attention. We’ve already been confirmed as an official partner of Homecoming 2014 and I want to hold a really big flagship event in Scotland to tie everything together.”

In terms of his own movements on World Whisky Day, Blair says he’s keeping his schedule free out of necessity.

“I had intended to go to a few events last year but I was so busy with media requests for interviews I ended up flitting back and forth between Edinburgh and Glasgow and was still doing TV interviews at 10.30pm! So I think I’ll keep my diary flexible and hopefully I’ll be able to raise a glass before midnight!”

World Whisky Day is Saturday May 18. More information can be found by visiting www.worldwhiskyday.com