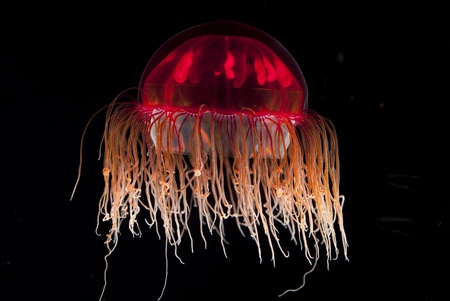 Undersea mountain ranges have long been thought to contain more marine life than other flat parts of the deep ocean but now an international team of scientists - led by the University of Aberdeen and Institute of Marine Research in Norway - believe that this is not the case.

Their findings - published today (May 3, UK time) in the journal PLOS ONE - have implications for how these areas should be managed and fished.

Marine life gets sparser the deeper and further you go from land, however sea mounts and ridges have been viewed as areas of the mid-ocean where marine life is plentiful. As such, they are attractive to high seas commercial fisheries, which operate in international waters beyond national jurisdiction.

Researchers have spent eight years researching the Mid-Atlantic Ridge - the world’s longest mountain range, which rises to around 3,500 metres from the floor of the Atlantic Ocean, stretches from the Arctic to the Southern Ocean, and divides the ocean into eastern and western deep basins.

Using a range of sampling techniques and satellite imagery to study marine life  they concentrated on  the Charlie-Gibbs Fracture Zone where two vast canyons cut across the Northern Mid-Atlantic Ridge, which has been declared  a marine protected area.

Professor Monty Priede, Director of the University of Aberdeen’s Oceanlab, said: “Mid-ocean ridges areas such as the Charlie-Gibbs Fracture Zone are rich feeding grounds. Many animals such as birds, dolphins and whales feed here and they are also used by deepwater fisheries.

“However our studies, which analysed food production and availability, showed that the volume of life mid-ocean would be the same if there was no ocean ridge, although the type of animals that would live there would be completely different.

“The ridge has the effect of compressing all marine life together into a thin layer, so you have the attaching animals such as corals, sponges and sea lilies, the burrowing and crawling animals, such as worms, sea cucumbers, brittle stars, star fish, crabs and sea spiders, as well as the swimming animals such as fish – all crowded over the summits, slope and terraces that make up the ridge.

“If there was no ridge there would be different animals, such as free-floating and swimming creatures, including deep sea luminescent fishes, jellies,  krill and squid which would be distributed throughout 3.5 kilometres - or 2 miles - depth of water

“There is no doubt that the presence of the Mid-Atlantic Ridge greatly alters the water circulation and biology of the Atlantic Ocean, providing habitat for deep sea animals that would otherwise not survive in mid ocean, including commercial fish species attracted to the summits.

“But the ridge does not increase biological productivity of the mid-ocean so we must bear this in mind when considering fishing in these areas. However the Charlie-Gibbs marine protected areas are a remarkable example of international cooperation to conserve offshore resources.”

Although they have discovered new species during their trips, the scientists have also established that most of the animals that colonise the Mid-Atlantic Ridge also live at the same depths on the continental slopes around the edges of the oceans.

Marine geneticists also found that fishes on the ridge and the edges of oceans are closely related to one another suggesting they move freely across the Atlantic Ocean.

While the ridge does harbour some species not found elsewhere, its main importance seems to be as a stepping stone for species to spread across the Atlantic Ocean.