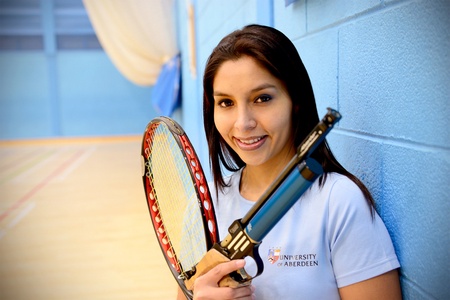 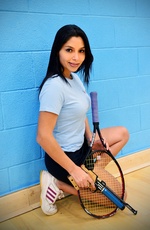 An Aberdeen University student who almost made it as a tennis ace has shown her determination by switching to a sport she'd never tried before just to fulfil her dream of reaching the Olympics.

Mariana Quintanilla followed a similar path to Scotland’s Andy Murray by attending a top tennis school in Barcelona but, despite playing at a high level, realised at 23 she was too old to make the top grade.

However, rather than turn her back on professional sport, her desire to compete at the Olympics drove her to target another sport to excel in.

She said: “I conceded I’d have to stop playing tennis at that level but I knew I wasn’t ready to ‘retire’ because I couldn’t imagine a life without having something to work on or to compete in.

“I thought about what sports I could switch to that I could get to a level where I’d make it to the Olympic Games. I narrowed it down to three or four sports but chose shooting. With shooting it doesn’t really matter how old I am or that I’m not so tall. I knew I wanted to do an individual sport because then the competition is with myself.

“To be honest I had no idea what shooting was all about – but I knew it was an Olympic sport and that’s all that mattered!”

In all Mariana played tennis for 15 years reaching international junior level and clinching a number of national championships.

Now though she is a regular in the Peru national pistol shooting team and is targeting a place at Rio 2016.

Mariana moved to Aberdeen last year to study for a Masters in Oil and Gas Enterprise Management at the University of Aberdeen. She is supported at the University in her sporting training and development by a Development Trust Sports Bursary which goes towards training, conditioning and physio costs.

She still plays tennis for the University team but now her main focus is on shooting where she hopes to add to her home country’s sole gold medal which was won back in 1948. A good omen for Mariana is that it came in shooting.

She added: “I have this feeling about the Olympic movement – the values and history are just something that fascinates me – it’s my dream.

“Just getting to the Olympics means you’re already the elite of the sport, it’s a great achievement in itself. Medalling is another dream but just being among the best in the world would be amazing.”

Mariana just missed out on qualifying for London 2012 but feels she’s still in the early stages of her shooting career.

She said: “I came late to shooting late but I think what I learned from tennis has given me a good starting point. When it comes to competing I learned how to manage my emotions. There are other skills and I’m learning a lot – it’s not going to be easy but it’s not impossible.

“At World level there are people aged 50 and older so I have time.”