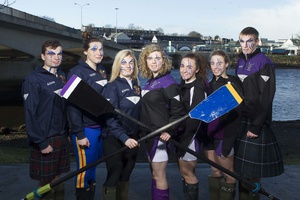 Final preparations are under way ahead of this weekend's Aberdeen Asset Management Universities' Boat Race.

Saturday’s race will be the 18th time the University of Aberdeen have gone head-to-head with their Robert Gordon University (RGU) counterparts.

Both teams have been training day and night in plunging winter temperatures in order to be in peak condition for the big day.

The race is all the more important for the University of Aberdeen crew as they lost the title to RGU last year.

Captain Ingibjørg Thomsen was part of that team. She said: “Crossing the line having not won is awful. It’s a very disheartening experience. You’re representing your entire University and you feel like you’ve let everyone down. But I’ve won the race previously as well and winning feels as good as losing feels bad!

“The rivalry’s massive – it’s been going on for 18 years so of course nobody wants to lose. It’s an honour to represent your university but it’s also about the glory – the bragging rights for an entire year.

Crew member Thomas Little will take part in his third race in four years this weekend. He said: “This is my last race for the University so I’m determined to win this one. I’ve won one and lost one so far so I want to go out on a high.

“RGU are fielding a stronger team every year which is making it even more of a close fought competition and it’s more of a goal for the club to win.”

Ingibjørg added: “You sacrifice time with your friends; you sacrifice your social life. Instead of eating a big fat cheeseburger or something you try and eat healthily all the time. You train Christmas Eve, Christmas Day, New Years to try and take every opportunity to train.

“The crew are coming together well. We’ve got some new people compared to last year’s team and some of the older members as well so we’re gelling nicely.

“We’re extremely grateful for all the support we’ve been getting and all the support and cheering we know we’ll get on the day. It really makes a huge difference when you hear them screaming from the riverbank.

“I’ll be nervous on Saturday as always but you can use that to your advantage. You just want to do your best and I know we will. We’ll give our very best.”

“The Aberdeen Universities’ boat race exemplifies all that is good about sporting rivalry – huge determination to win on both sides but fought between the two crews in great spirit.

“It’s a significant event for the City - I’ll be cheering them on from the riverbank along with my family and I hope our side are celebrating at the end of the day.”

Each of the 16 rowers will take just under 300 strokes in the course of the 3.5km race and along with the crew coxes, will push their physical and mental endurance to the limit. The race stretches between the River Dee in Aberdeen and the Bridge of Dee and the Aberdeen Boat Club.

The race programme gets under way at 2.20pm on Saturday March 2. The Universities’ Second Crew Race starts at 3.05pm, the Alumni Race begins at 3.25pm with the main Aberdeen Boat Race starting at 4.30pm.

The University of Aberdeen crew in full: Ingibjørg Thomsen, 25, from the Faroe Islands;  Alexander Wöhling, 24, from Germany; Thomas Little, 22, from Northern Ireland; Erica House, 21, from Somerset; Emily Colley, 19, from Glasgow;  Iain Walker, 18, from Edinburgh and Thomas Coles, 19, from Callander.

Full race day details can be viewed from the following link: https://www.abdn.ac.uk/local/filetransfer/files/3e8382cf2578af311efdc2ad668dce40/BoatRace_mobile_teams_AU.jpg