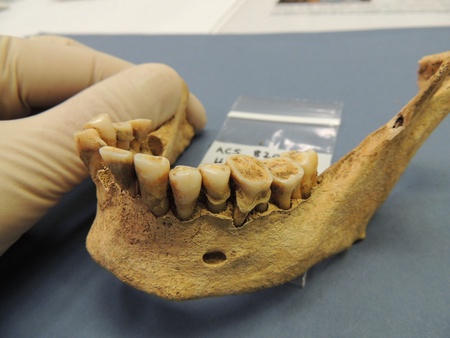 DNA from tartar preserved on the teeth of ancient skeletons has revealed the consequences of changes in human diet and health from the Stone Age to modern day.

The ancient genetic record reveals the negative impact and changes farming and manufactured foods have had on the evolution of our oral bacteria.

An international team, led by the University of Adelaide’s Centre for Ancient DNA (ACAD), along with the University of Aberdeen and the Sanger Institute at Cambridge, has published the results in Nature Genetics today (Sunday 17 February).

Project co-leader Professor Keith Dobney, Sixth Century Chair of Human Palaeoecology at the University of Aberdeen said: “This provides us with a completely new window on how people lived and died in the past. Knowing the real genetic history of diseases we still suffer from today will help us better understand and even treat them.

“Being able to track them through time has huge implications for understanding the origins and history of human health – making the archaeological record extremely relevant and important to modern-day medics and geneticists.”

The researchers extracted DNA from tartar (calcified dental plaque) from 34 prehistoric northern European human skeletons, and traced changes in the nature of oral bacteria from the last hunter-gatherers, through the first farmers to later Bronze Age and Medieval times.

Study leader Professor Alan Cooper, Director of ACAD said: “This is the first record of how our evolution over the last 7,500 years has impacted the bacteria we carry with us and their important health consequences.

“Oral bacteria in modern man are markedly less diverse than historic populations and this is thought to contribute to chronic oral and other disease in post-industrial lifestyles.”

The development of farming around 10,000 years ago caused a major shift in human diet, resulting in a significant impact on our health. The same was true of the much more recent move to eating highly processed flour and sugar, both of which have contributed directly to health problems we see today such as tooth decay, diabetes and heart disease.

Professor Cooper added: “The composition of oral bacteria changed markedly with the introduction of farming, and again around 150 years ago. With the introduction of processed sugar and flour during the Industrial Revolution, we can see a dramatically decreased diversity in our oral bacteria, allowing domination by caries-causing strains. The modern mouth basically exists in a permanent disease state.”

Ironically, the introduction of sugar and carbohydrates contributed to the increase in dental plaque that now holds the vital information the scientists are studying.

Professor Dobney added: “Until now we’ve had to rely mainly on indirect evidence or historical documents to tell us what people ate and what kind of illnesses they suffered from in the past. But now we can directly extract genetic information on diet and health from the tartar on teeth – which is very abundant and well-preserved in the archaeological record - we have a totally new source of unique information stretching back thousands of years.”

Dr Julian Parkhill, co-author from the Wellcome Trust Sanger Institute said: "We have shown that genetic sequencing is not restricted to modern samples. Sequencing the oral microbiota of different populations, over the ages, from across the world will tell us how different diets have affected human health, opening a whole new area of research.

Professor Dobney and Professor Cooper have been working on the project for the past 17 years but only since 2007 has it been possible to carry out the research as a result of ACAD’s ultra-clean laboratories and strict decontamination and authentication protocols.

The research team is now expanding studies through time, and around the world, including other species such as Neanderthals.