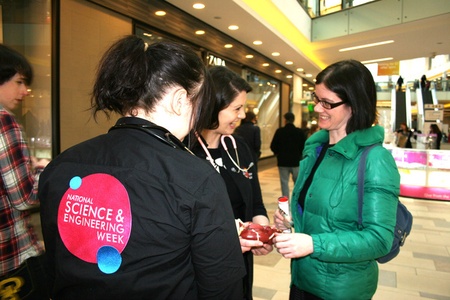 The prize will be awarded annually to a member of staff or student who has established a track record or made a significant contribution in public engagement inspired by areas of University research.

Professor Diamond said of the prize “The University of Aberdeen is committed to achieving distinctive excellence across all aspects of its activities including the vital objective of engaging with society.  We have a considerable track record, with public engagement becoming ever more embedded in our core business. Fundamentally, it is the quality and creativity of our own staff and students that make us stand out in this exciting arena.”

A winner and runner up will receive a personal prize of £500 and £250 respectively plus a matched allocation to help fund a public engagement activity or personal development opportunity of their choice.

Heather Doran of the University’s Public Engagement with Research Unit commented “We hope the prize will motivate people to reflect on their public engagement activities while emphasising the importance the institution is placing on this growing area of activity.”

Alongside the prize, the Public Engagement with Research and Researcher Development Units today announced new ‘enabling funds’ to provide support for projects in public engagement and researcher skills development. The two funds will operate in responsive mode throughout the year and simultaneous applications to both funds that seek to combine skills development with engagement outputs are particularly welcomed.

Nominations for the 2013 Principal’s Prize are open until 5pm on Friday the 5April 2013 and winners will be announced at the University of Aberdeen May Festival. More information about the prize and the enabling funds can be found at www.abdn.ac.uk/engage.