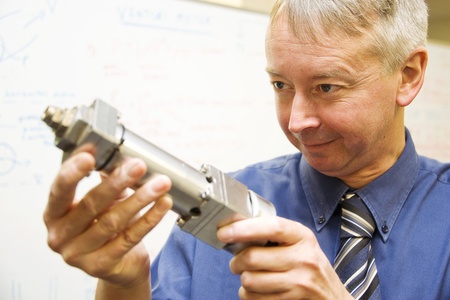 Scientists working on the development of cutting edge sensor systems, which could transform the future of the subsea industry, will showcase their work at a conference in Aberdeen this week.

Academics from the Universities of Aberdeen, Dundee and Robert Gordon University working together as part of the Scottish Sensor Systems Centre (S3C), will attend Subsea 2012 which takes place on Thursday (February 9) at the Aberdeen Exhibition and Conference Centre.

Funded by the Scottish Funding Council, the S3C brings together the research expertise from Scotland’s leading universities, with industry and the public sector to work together on the development of new sensors for applications in the subsea, marine and aquaculture sectors.

Subsea 2012 will provide the opportunity to showcase the achievements of the subsea strand of the initiative, since its launch last summer.

The event will also allow representatives from industry to learn more about the ways in which   they can work collaboratively with the S3C.

The initiative is currently inviting applications from industry and public sector organisations for research projects in subsea sensing, which would be funded and undertaken in collaboration with experts from the S3C.

Dr Richard Neilson from the University of Aberdeen’s School of Engineering who spearheads the S3C’s subsea work with colleagues from Dundee and Robert Gordon universities said:
“The S3C is a unique national initiative which brings together Scotland’s leading academics in the field of sensor technology to work together on new solutions which could transform the future of the subsea sector.

“At Subsea 2012 we will showcase the technology and techniques we are developing, with the aim of creating next generation sensor systems which could vastly improve processes and efficiency for the subsea sector.

“This includes the use of infra-red and fluorescence to monitor hydrocarbons, tracers and other species in the marine environment, and our research into the use of spectroscopy in deeper waters which could allow for atomic analysis of many materials with little or no preparation.

“We will also highlight our investigations into how terrestrial sensor technology can be adapted to work just as effectively in subsea environments and the major benefits this could have for industry.

“The event also provides the chance for representatives from the subsea industry to learn more about the collaborative opportunities which exist with SC3.

“We currently have a call out for applications from industry for projects which have subsea applications in the field of subsea, including oil and gas, renewables, marine science, or aquaculture or energy.

“Funding support of 5K - 20K is available for up to 7 individual projects, which would involve experts from the SC3 working together with the applicants on either a concept for a sensor system, a prototype or investigative work feasibility studies.”

The S3C event will take place at Subsea 2012 on February 9, in the P&J Arena Seminar room beginning at 2pm.

To apply for the call for projects in subsea sensors visit http://sensorsystems.org.uk/news/call-for-subsea-sensors-projects/ . The closing date for applications is 12noon, March 1, 2012.