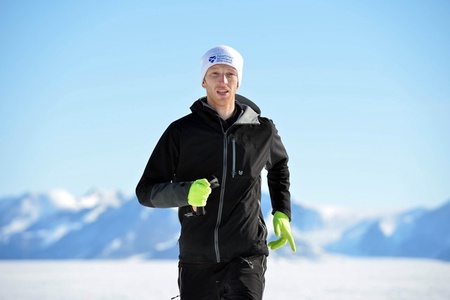 An inspirational GP from Aberdeen who ran seven ultra marathons on seven continents in less than a week is to recount his amazing achievement at an event in the city.

In addition to completing his staggering feat a day and a half ahead of schedule he also won the North Pole Marathon, The Antarctic Ice Marathon, and the Gobi Desert challenge.

He said: “I love that I’m getting the chance to share my story again in Aberdeen. 2012 was an epic year, with races at the North Pole, Antarctica, and Outer Mongolia, as well as the seven ultra marathons in seven continents - so there have been some great stories to tell. I’ve met some amazing people.

“I love having the chance to show video and photos, but actually the best bit is the questions, it's always interesting hearing other people's ideas on running, adventure, and being an Aberdeen lad, it'll be great getting back up. In terms of the cold - Antarctica has prepared me well for Aberdeen!

His talk will kick off the University of Aberdeen’s popular Café Scientifique winter/spring programme. The event is free to attend and will be held at the newly refurbished Costa Coffee in Waterstones Union Bridge on Wednesday January 23 at 7pm. No booking is required so the public are urged to arrive early to secure a good seat!

The University's café discussion series are supported by a science engagement grant from the Scottish Government. Full details of all current programmes can be found at www.engagingaberdeen.co.uk