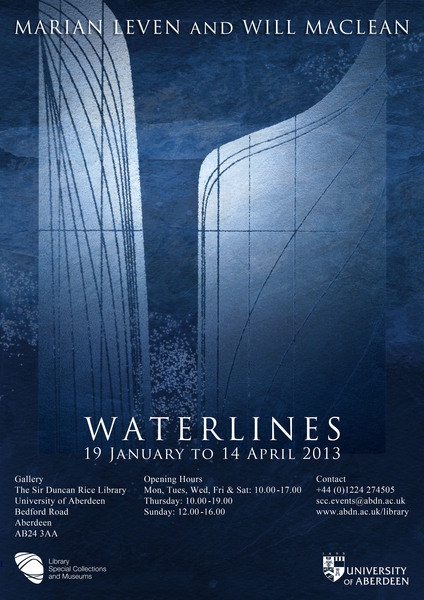 A new exhibition, inspired by a sculpture celebrating Aberdeen’s maritime heritage and historic sculptured stones, has opened at the Sir Duncan Rice Library, University of Aberdeen, on January 19.

Waterlines is based around the sculpture of the same name by artists Will Maclean and Marian Leven, which marks the entrance to the Library’s academic square.

The piece, which is formed from Kilkenny Blue limestone, is the first sculptural collaboration between two of Scotland’s most highly-regarded and well-established artists and the exhibition examines what inspires and informs their creative process.

The exhibition includes paintings and other sculptural pieces by the artists as well as items from the University of Aberdeen’s Special Collections which also connect to the rich maritime heritage and standing stones tradition of the local area.

The Waterlines sculpture is based on the form of the iconic Aberdeen fast sailing ship the Thermopylae, built by Walter Hood and Co, she launched in 1868 and is considered to be one of the fastest sailing ship ever constructed.

Leven and Maclean are Fife-based artists who have exhibited prolifically in Scotland and beyond. Their work is rooted in Scottish and Highland culture and landscape, with Maclean drawing on his formative career as a merchant seaman.

Waterlines marks the first sculptural collaboration between the husband and wife pair, who met at Gray’s School of Art and have maintained close links with the North East.

Chris Banks, University Librarian and Director, Library Special Collections and Museums, said: “Will Maclean and Marian Leven are among Scotland’s most respected artists. The Waterlines exhibition offers an interpretation of a new sculptured marker in the landscape.

“It is fitting that the exhibition will take place at the Sir Duncan Rice Library; it also offers some of the best views in the city of the land and seascapes which influenced the creative process behind the sculpture.”

The Waterlines exhibition opens on Saturday January 19 and will run until April 14. It will be accompanied by a series of talks throughout February and March, including a session by the artists, reflecting on the work.