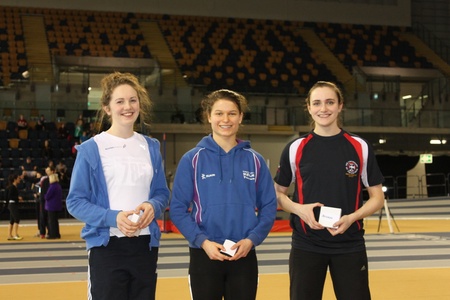 The University of Aberdeen’s athletics stars are celebrating after a near clean sweep of the sprinting awards at Saturday’s Scottish Student Sport Indoor Athletics Championships.

Zoey Clark struck gold twice – winning the Women’s 60m ahead of Kathryn Christie of Aberdeen College with a Championship Record of 7.76 seconds. She followed up that success later in the day by taking the 200m title very comfortably with a time of 25.4 seconds.

Stephen Dunlop also topped the podium in the Men’s 200m with a new indoor personal best time of 22.52 seconds. That win made up for his narrowly missing out on the gold in the Men’s 60m earlier in the day, where he eventually had to settle for silver.

The sprinters’ medal haul at the Emirates Arena in Glasgow was completed by the University’s Demi Ademuyewo who scooped bronze in the Women’s 200m.

University of Aberdeen’s Head of Sport Donald Pirie said: “This was another strong showing at the Scottish Student Sport Indoor Athletics Championships for our athletes. My congratulations go out to everyone who competed and particularly to those who secured medals.

“Zoey is our John Robertson Sports Scholar recipient and Stephen receives a Development Trust Sports Bursary so we are especially delighted that these awards have been bestowed upon such promising athletes and that they are contributing to positive results on the track.”