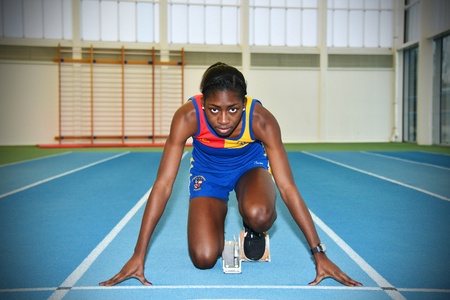 Inspired by the sight of the Olympic torch passing through Aberdeen’s Castlegate last summer, local student Demi Ademuyewo decided to put her planned engineering career on hold and focus on her dream of becoming a professional sprinter.

The 22-year-old had just finished her third year of a Bachelor’s degree in Mechanical Engineering at the University of Aberdeen when, standing among the throngs on Union Street, she made the life-changing decision to target a place at the next Olympics in Rio in 2016.

First though, Demi, who is eligible to represent Britain or Nigeria, had to break the news to her parents.

She said: “As clichéd as it sounds it was just a moment of – I have to do this! I was watching the torch go by and it just made sense. It was a great moment but I was scared as well because being an African child and being three years into an engineering degree - you don’t go and tell your father that after all these years I’m going to go and run instead!”

“Athletics plays such a huge part of my life and I’m not going to get any younger so I might as well take this time to dedicate myself to it and if it doesn’t work – at least I’ll know that I tried.”

Demi hopes to follow in her brother’s incredibly fast footsteps. Debo Ademuyewo has already represented Team GB at the World Indoor Championships in the 400m and was in contention for a place in the Beijing 2008 Olympics team before he was struck down by a hamstring injury.

“He’s a big, big role model for me.  The first thing after I run a race I text my brother. He says, ‘ok, you need to get faster – do this, do that’. So if he knows that I can do it and my coaches know I can do it - I can do it. I’m developing and with hard work I can get there it’s just that hard work isn’t easy!

“I set my ambitions really high and it’s scary trying to meet my own expectations. I feel I can get to the same stage as my brother. I think I could make to the highest level – to Rio. But that’s going to take a lot of hard work. I always say talk is cheap so I try and put in the work at all times before I jinx myself.”

With her dual nationality, Demi will have to choose between Team GB or Nigeria should she make the grade. Her choice is even more complicated at Commonwealth level though, where she could run for England, Nigeria or Scotland.

She said: “From next year I should be eligible to run for Scotland because I’ll have been in the country for five years. I would love to run for Scotland. I’d love to wear the vest. It’s become like home because I’ve been in boarding school and when my parents moved back to Nigeria I was staying with my brothers in the UK and after boarding school I came straight up here so it’s kind of been my base for five years now.

“If I make the times I could choose between Scotland, England and Nigeria at the Commonwealth Games in 2014. If they’ll have me! I hope I get the chance to make the decision.

“For the Scottish team you have to run a certain time twice by a certain date so once you run those times you are eligible to be picked for the team.

“I don’t really know what goes on in Nigeria because no one has contacted me but I know they contacted my brother. It’s a case of you run the times and then people will ask about you, not you asking about them –so whatever comes first.”

Demi has already competed at the British Universities Championships and last year she came third in the 200m outdoors at the Scottish Universities Championships. This year she is competing in the 60m and 200m and hopes to medal in both. She is also looking to break into the 400m sprint division. She was also awarded Aberdeen Amateur Athletics Club Ladies Sprint trophy last season.

She admits her knowledge of Aberdeen was limited when she applied to the University of Aberdeen to study for a BEng in Mechanical Engineering but she has been impressed by the city’s sporting facilities.

She said: “I chose it for no other reason than it was at the top of the map! I also applied to Loughborough who are renowned for their sporting facilities and success and my coach said – better go to Loughborough, they’ve got better facilities – what does Aberdeen have to offer? I didn’t even know they were building the Sports Village so after I arrived I emailed my coach and told him, ‘come check this out – It’s amazing!’.”

Demi never intended to stay in the North-east after her graduation this summer but after such a positive experience now faces a difficult decision as she turns professional – whether to remain in the Granite City or head to Bristol where she could train daily with her brother.

She said: “I graduate in July, I really like my coaches here in Aberdeen and I don’t want to change them so it’s a big decision as to whether I’ll stay or go. I would like to go somewhere warm but if they want me to run for Scotland I’d stay put.”

Demi will now have to balance studying towards the final year of her degree along with ramping up her training ahead of her turning professional. In addition she is desperately seeking vital sponsorship that she’ll need to sustain her push for glory on the track.

She added: “Most of my money goes on kit and Uni. I need to get sponsorship for when I go fulltime. I’m hoping my mum will help me write the letters to people while I’m studying so I can have something lined up by the time I graduate.

“I have the Scottish Universities Championships on 12 January and the National Open on 19 January which is bang in the middle of exams but I need to run these races. I have to make sure I obtain my degree though because although I’m not going to use it straight away, it will never expire so I could still use it in the future after athletics.”