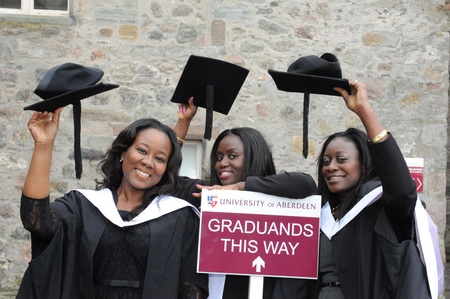 The University would like to congratulate all of its students on their graduation day. Here are just a few examples of this year's outstanding student success stories.

With a desire to help people, Christian Harrison always wanted a career where he could make a difference, and he is hoping to do just that after graduating with a distinction in Masters of Business Administration (MBA) today.

Christian, originally of Nigeria, made the decision to study for his MBA in order to complement his existing Bachelor of Pharmacy degree, which he received first class honours in at the University of Lagos in Nigeria.

Whilst working as a Community Pharmacist in Lagos, Nigeria, Christian felt that to enhance his already impressive CV and in order to position himself as a future business leader, a move to Aberdeen would provide him with the necessary skills and knowledge.

“I was delighted to move to the north east to attend the University of Aberdeen and it has been a fantastic experience. The support of all the University staff and being able to take advantage of all the educational resources available to me in order to improve and perfect my knowledge has been significant in all that I have achieved,” says Christian.

“In the future, with my business skills, I hope to set up and run a pharmaceutical establishment that will stand the test of time. I also hope to take up a consultancy role to help pass on the knowledge I have gained during the course of my research to students, executives, managers, entrepreneurs, employees and a host of others. By then, I hope to have achieved a Doctorate in Management Studies from the University of Aberdeen.

Schools with just a handful of pupils provided the inspiration for Gaynor Steel’s Masters degree in Education but she had to juggle her own expanding family with the demands of studying for her degree.

Gaynor, from St Fergus, near Peterhead is the Head Teacher of Ardallie School, which was closed temporarily in August after the school roll fell to just two pupils.

Her interest in small schools and their unique challenges and benefits inspired her thesis for which she examined 10 primary schools in rural Aberdeenshire.

But while pupil numbers at Ardallie may have fallen, Gaynor’s own family expanded as she gave birth to son Euan in November 2011, in the midst of studying for her Master’s.

Gaynor, who also has son Ethan, six, and two-year-old Emma, had to fit her University work in around the children.

She said: “I did the bulk of the work on my project from the beginning of last year while I was on maternity leave.

“It did mean I was working all hours and I think I’m fortunate the children are all good sleepers so I was able to get some studying done!

“It was a lot to juggle at the same time but after completing a Scottish Qualification for Headship  a few years ago I knew I wanted to do a Master’s before I turned 40.

“I celebrated my birthday last December so that kept me motivated along with the encouragement of my family, my colleagues and my tutor.  Without their support I think I’d have given up a long time ago.”

Now temporarily redeployed as depute head at Ellon Primary School, Gaynor said her own experience working in small schools helped with the research she carried out for her thesis.

“I looked at 10 small schools in Aberdeenshire and interviewed pupils, parents, members of staff and members of the local community,” she added.

“Small schools bring with them a different set of challenges and benefits and I wanted to further my own knowledge and understanding of best practice.

“It was a big help having my own personal experience of working in a school with a small number of pupils to draw on.”

Gaynor’s eldest son and husband will be present to see her collect her Masters in Education at Elphinstone Hall, Aberdeen, on Thursday (November 29).

A Moray mother of five has completed her second degree under dramatically different circumstances from her first which she finished 16 years ago – whilst raising five children.

Lorna Watson who is originally from Buckie but now lives in Keith gave birth to two of her children during her studies for her MA in Sociology from the University of Aberdeen which she completed in 1996.

At one point Lorna sat an exam the day before giving birth to her baby girl – who she then had to carry with her to and from classes as she couldn’t afford childcare.

She said: “It was crazy but it was the only way I could finish the course.

“Thankfully she slept through most of my classes and the department was always really helpful.”

On one occasion she took her toddler to a tutorial and put him in his buggy – giving him juice and biscuits to keep him occupied.

“He eventually got restless so the lecturer picked him up and gave the class with him sitting on his knee. He was blowing him raspberries and making funny faces while he went along.”

Lorna, who is proud of her working class background, said she persevered with her studies so her children could have a better future.

Far from resting on her laurels, whilst working as a Social Enterprise Development Officer for Moray Community Health and Social Care Partnership, Lorna decided to return to higher education. She admits she began her MSc in Sociology, “to see if I had any brain cells left working!”.

Although some of her children had grown up by the time she returned to the University of Aberdeen in 2010 her studies were no less hectic because during that time her partner Stewart Cree who was councillor for Keith and Cullen chose to stand for re-election and was eventually appointed convener of Moray Council.

She said: “It was quite hectic writing up my thesis whilst supporting Stewart during his re-election campaign. It wasn’t the same as raising five kids but it definitely wasn’t easy!”

Her return to studying was as much for her own personal progression as it was for career development.

She said: “I would have done the PhD straight after the MA but I needed to make money to support the children so I just couldn’t do it.”

Lorna’s youngest child is now 16 and her oldest is in her ‘30s. Many of them have gone onto higher education, including her youngest who is at Moray College. They didn’t have the same experience as their mother.

Lorna said: “They’ve learned from me and none of them have attempted to do it whilst having kids!”

Lorna will graduate with an MSc with commendation in Sociology on Thursday. She hopes her interest in higher education has been a good role model for all her children.

She said: “It was normal that in the evening we would finish dinner and then get our textbooks out. It helped create a culture of education in the house.”

She also praised the University of Aberdeen for their assistance during both her stints studying.

She said: “The University have been supportive all the way through – you’d expect the focus to be on the young ones but they take account of the ‘old wrinklies’ as well. It doesn’t matter who you are, their attitude is, “how do we help this person get an education.”

Lorna is not finished studying yet though and will start her PhD at the University of Aberdeen in early 2013.

She said: “You should never stop learning because there are so many benefits psychologically. It helps you to stay useful and engaged. It’s just something I love.”

A mother chose to travel thousands of miles to join two of her children studying at the University of Aberdeen.

Lubna Akhtar was working as an English teacher in Pakistan but when she decided to undertake a Masters in English Literature Studies there was only one place she wanted to go.

Lubna’s son Bilal is currently studying for a Masters in Engineering at the university and her daughter is working towards a PhD in Mental Health.

She said: “I had been over to visit the children and I always really liked the city as it’s very cosmopolitan. So when I decided to take on the degree I was pretty convinced Aberdeen was where I wanted to go.”

“It’s been nice being close to the kids and the course has been intellectually stimulating.

“I’ve thoroughly enjoyed studying here. It was everything I hoped it would be.”

Lubna will graduate the day before her 50th birthday and is now looking forward to returning to Pakistan, where she teaches at the British Overseas School in Karachi.

She hopes one day to undertake a PhD but says at the moment the family’s finances are being focussed on putting her children through university.

An Aberdeen University student’s dedication to her studies almost meant she was forced to give birth hundreds of miles from home.

Michelle Attard Tonna from Malta was completing a PhD in teacher professional learning at the School of Education, University of Aberdeen as an off-campus student, but regularly travelled to the campus to meet her supervisors and fellow students.

Having travelled to the North-east to take an exam, Michelle was almost left stranded when she was refused permission to board her return flight to Malta because she was 33 weeks pregnant and airlines will not take liability that late in a pregnancy.

She said: “Although I love Aberdeen and its people, home is Malta and that is where I wanted my son to be born, surrounded by my husband, daughter and parents.”

Michelle eventually managed to bypass the airline staff to obtain a boarding card and her son was born in Malta soon afterwards.

Although she is now based full-time in Malta and works as a teacher educator, Michelle says Aberdeen will always have a special place in her heart and she will continue to visit.

She said: “I like the countryside, the parks and the scones! I think the city has an eclectic feel. In Malta I live five minutes away from the beach, so the sea is a very big part of who I am. Coming to Aberdeen and finding water was marvellous – even though it wasn’t warm enough to swim in!”

Aberdeen’s former ‘first citizen’ Peter Stephen is awarded the degree of Doctor Honoris Causa. As Lord Provost, and as an Aberdeen City Councillor, Peter Stephen made a major contribution to civic life over a number of years.

He was born in Aberdeen and educated at Sunnybank Primary School and Robert Gordon's College. On leaving school, he joined the Union Bank of Scotland Ltd, holding various managership roles in Scotland, ultimately retiring in 1991 as a Corporate Banker.

Peter Stephen actively promoted Aberdeen’s commercial strengths to industry at home and abroad. In this ambassadorial role, he also regularly supported higher education in the City and was a recognised champion for several local charities.

The Hon Lord Bracadale, a Judge of the Supreme Courts in Scotland since 2003, becomes a Doctor of Laws. A graduate of the University of Aberdeen, he initially worked as an English teacher before embarking on a law degree at the University of Strathclyde.

The Rev Dr Alan Falconer was minister of Aberdeen’s Cathedral Church of St Machar from 2004 to 2011. Dr Falconer life's work has been in the theology and practice of ecumenical reconciliation.

From 1995 to 2004 Dr Falconer was based in Geneva as Director of the Faith and Order Commission of the World Council of Churches.