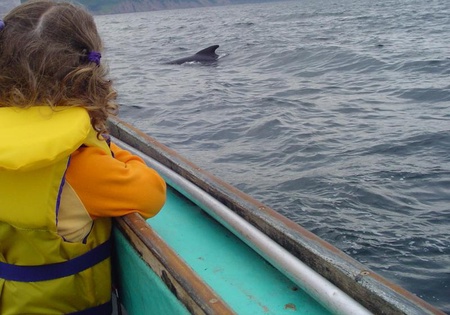 A group of organisations have joined forces to understand the potential impact of boat movements on bottlenose dolphins in Scottish waters.

A computer model has been developed by the University of Aberdeen to allow predictions to be made about effects on dolphins from proposed developments in the Moray Firth area. Scenarios included planned offshore renewables facilities at Nigg and Whiteness and associated vessel movements. Tour boats and other marine traffic were also assessed using the new computer model.

Work was carried out with the backing of the Inner Moray Firth Ports and Sites Strategy Working Group.

Boats which behave predictably are far less likely to have an adverse effect on dolphins compared to those which follow the animals. Dolphin foraging hotspots at the Chanonry Narrows, the mouth of the Cromarty Firth and the Kessock Channel are considered more sensitive to boats which spend time there rather than passing through.

There are around 195 bottlenose dolphins in the resident east coast Scotland population. They regularly feed in the Moray Firth Special Area of Conservation (SAC) where they are a tourist attraction. Scientists who study them believe the small and isolated nature of their population makes them more prone to being disturbed.

These results are highlighted in a new report published by Scottish Natural Heritage (SNH) which deals with better understanding of dolphin and boat behaviour and interactions on behalf of the working group.

Two of the main conservation objectives for the Moray SAC are to avoid a decline in the dolphins' habitats in the area and to prevent significant disturbance.

Ben Leyshon of SNH stressed: "We and our partners, including developers, have been working hard to ensure that future proposals are planned as sustainably as possible. We are all committed to ensuring this happens.

"By working together on this model we aim to produce a tool that can inform future development while at the same time recognising the fact we have a duty to protect the wild mammals living in our waters."

Councillor George Farlow, vice chairman of The Highland Council's Planning, Environment and Development Committee, stressed: "This is an important piece of work which will support future sustainable development within the Moray Firth, while ensuring that we afford bottlenose dolphins the protection they deserve. We are very happy to have contributed to this worthwhile partnership project."

The report published by SNH is called "The development of a framework to understand dolphin behaviour and from there predict the population consequences of disturbances for the Moray Firth bottlenose dolphin population". It was commissioned by the Scottish Government, Scottish Natural Heritage, Highlands and Islands Enterprise and The Highland Council.

The SNH commissioned report is at www.snh.gov.uk/publications-data-and-research/publications/search-the-catalogue/publication-detail/?id=1958

The Inner Moray Firth is a Special Area of Conservation (SAC) designated in part to protect the area's population of bottlenose dolphins through the EU Habitats Directive.

Scottish Natural Heritage is the Government's advisor on all aspects of nature and landscape across Scotland. Our role is to help everyone understand, value and enjoy Scotland's nature now and in the future. For further information visit www.snh.gov.uk SNH media is also now on Twitter at www.twitter.com/SNH