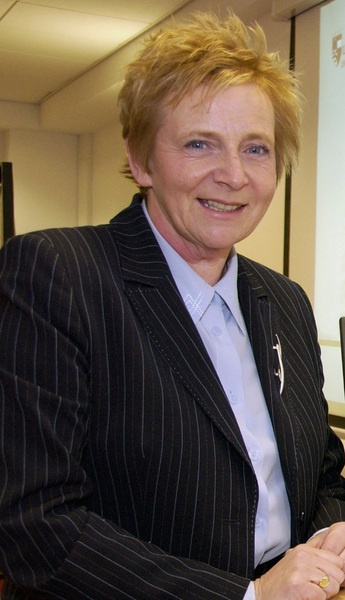 Tributes have been paid to Myra Pearson OBE, former Head of the School of Education, who died at the weekend.

Myra was appointed to the role of Head of the School of Education in 2006, a post that she held until 2010 when she retired early following the onset of leukaemia. Her determination to conquer her illness remained strong until she suffered devastating complications recently.

Professor Margaret Ross, Head of the College of Arts and Social Sciences, said: “Under Myra’s leadership the school’s teacher education provision became a model for other universities.

“She supported colleagues in the school to grow their skills and was a tremendous advocate for the school in the College and wider university.  Having been involved in international exchanges in education and teacher education, she widened the School’s international activities, and took a “can do” approach to many new ideas.

Tribute has been paid to Myra in the following words issued by the General Teaching Council for Scotland:

“Myra was a much-respected figure in Scottish Education. A committed teacher, Myra was one of a team who produced a well-known and much used primary Mathematics course; she became a lecturer in teacher education on the Jordanhill  Campus of Strathclyde University and, of  course, she went on to make a significant contribution to  the development of GTC Scotland as Depute Registrar (Education) and, later, as a Council member.

“Her last post was as Head of the School of Education in the University of Aberdeen. During  Myra's time in post, the School restructured its teacher education provision and took forward  a number of significant initiatives which brought great credit to the university. Myra also had a major influence on thinking across Scotland as Chair of the Scottish Teacher Education Committee.

“For many of us, however, Myra was a good friend and a helpful colleague.  A bright woman who always remembered that education was about children, she could be quite direct and assertive with those who had less noble priorities. We will remember Myra as an intelligent, innovative, witty and supportive colleague. She will be greatly missed.”

Professor Ross added: “Her many colleagues in the College of Arts and Social Sciences and across the University will recognise these same qualities, and share the feeling of untimely loss of a committed colleague and friend.