Want to be the next big name in science communication?
15 November 2012 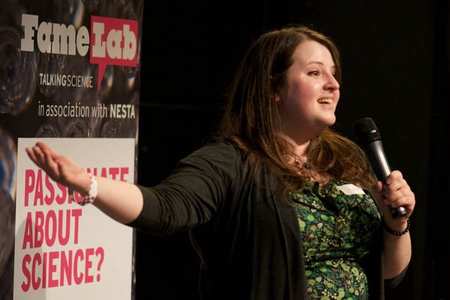 The search for the best new science and engineering communicators is on in Aberdeen next week.

FameLab, the UK’s biggest competition to find the newest voices of science communication is joining up with the University of Aberdeen’s Public Engagement and Researcher Development teams to host a training session and heats open to almost anyone working in the sciences.

Competitors will perform in front of a panel of judges. Four finalists will go through to the Scottish final in Edinburgh held in the city’s Stand Comedy Club on 1 December, and ultimately compete for a place in the UK final held next April at the 2013 Cheltenham Science Festival - where they could take home £1,750 to further their careers. Scottish winners will also receive a masterclass with some of the UK’s top science communicators.

FameLab was first launched in 2005 as an initiative of the Cheltenham Science Festival working in association with the National Endowment for Science, Technology and the Arts. The competition is designed to help motivate and encourage scientists and engineers to talk about their work with the public.  Contestants have just three minutes to present a topic in science, engineering or maths in an exciting and engaging way to a non-specialist adult audience.

Dr Kenneth Skeldon, Head of Public Engagement with Research commented "This is the first time that the UK Famelab competition’s Scottish heats have been held north of the central belt. As a past regional finalist, I can vouch for the competition’s ability to build confidence and sharpen creativity and communications skills – it is a great experience."

In the 2011 competition three University of Aberdeen postgraduate researchers took part in the Scottish final. The hope is that more Aberdeen researchers get engaged with this year’s competition.

Dr Lucy Leiper of the University’s Researcher Development Unit added "FameLab is a great personal development opportunity for anyone working in the sciences and gives an opportunity to shake off any stereotypical images of working in these areas. We’re keen to ensure that the competition has a wider impact for University researchers using this as an exciting opportunity to develop their transferrable skills."

The FameLab Aberdeen heats take place at Satrosphere science centre on Tuesday 20 November from 2pm. The optional training session is being held earlier that day from 10am-12.30pm. Winners must be able to proceed to the Edinburgh final on Saturday 1 December to have a chance to compete in the National Final. The University is providing free transport to and from the Edinburgh final.

Entry to Famelab is free and can be done online at www.famelab.org/uk.