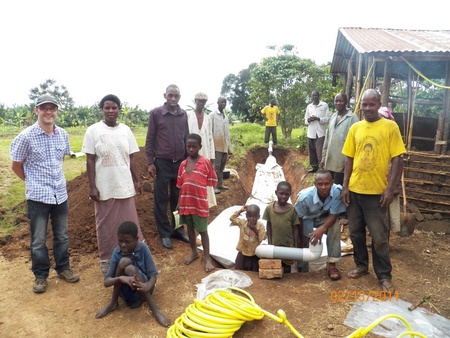 Scottish scientists are investigating the potential of a renewable energy source that uses organic waste to generate a fuel called biogas to see if it can help communities in sub-Saharan Africa.

The University of Aberdeen and the James Hutton Institute are collaborating on a project using the technology, which has also featured in a storyline in Radio 4’s long running serial The Archers*.

The Department for International Development is funding the work which involves looking at ways biogas digesters could help livelihoods and the environment in Uganda.

Digesters work very like the digestive process of a cow – they generate biogas as they decompose organic material such as human and animal waste and dead plants.

The captured biogas can then be used for ‘cleaner and greener’ cooking and lighting - cooking in Sub-Saharan Africa is often done in an enclosed space without good ventilation, resulting in a smoky atmosphere which is very harmful to human health.

Leftover slurry produced by the digester can also be used to fertilise land and in aquaculture.

Nine digesters are being installed in a village in Tiribogo near Kampala, Uganda, which is very close to a forest undergoing rapid deforestation.

Dr Jo Smith, Reader in Soil Organic Matter and Nutrient Modelling at the University of Aberdeen, is leading the work. She said:  “The aim of this project is to determine the potential of the cheapest design of biogas digester.

“We want to see what changes are needed in farmers’ attitudes and in the design of farming systems in order for these devices to be used.

Grant Davidson, International Development Co-ordinator at the Hutton Institute, added: “Greater use of biogas at the household level can have wider environmental benefits too, as it means there is no need to cut down trees or spend time collecting firewood for cooking.

Dr Smith added: “Biogas digesters have really taken off in Asia but that is not the case in many African countries.  This project will provide evidence that hopefully starts to reverse this trend, leading to greater use of this cheap, sustainable and clean energy across Africa. ”

*Biogas was the talk of Ambridge and beyond when David and Ruth hoped to build a digester on their land to make biogas from farm waste.