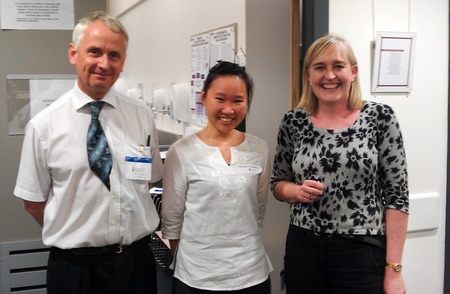 Twenty-four-year-old Hwei Jene Ng made it through to the final of the nationwide Surgical Skills Competition after competing against 8 fellow medical students from the University of Aberdeen at the North of Scotland regional heat of the competition by demonstrating a range of her surgical skills, from suturing and knot-tying to undertaking a series of key-hole surgical tests.

Organised by The Royal College of Surgeons of Edinburgh (RCSEd), the Student Surgical Skills Competition sees medical students from across the UK competing in regional heats to be in with a chance of making it through to the grand final in Edinburgh on 9 March 2013. The overall winner will win a trip to sponsors’ Johnson and Johnson Medical Companies’ European Surgical Training Institute in Hamburg later in the year.

“I did find the competition challenging, but it was also fun because I did not have any formal teaching on any surgical skills so this competition gave me that exposure. As I am interested in surgery, I definitely think taking part in this competition will help my career ambitions.  I am extremely thrilled and excited to take part in the final next March!”

“The competition is a great way for medical students aspiring to become surgeons to demonstrate their interest in surgery and to develop their skills. We have a very enthusiastic group of undergraduate medical students, supported by the Ogston Surgical Society, and it was great to see them compete with such enthusiasm and skill.

"The Royal College of Surgeons of Edinburgh has made a commitment to training and supporting aspiring young surgeons from the most junior levels, and the competition is a good illustration of this. Such events allow students to meet with College Fellows who are interested in supporting their career aspirations.”

For further information or images:

About the Royal College of Surgeons of Edinburgh

RCSEd was incorporated in as the Barber Surgeons of Edinburgh in 1505, and is one of the oldest surgical corporations in the world.  It has around 19,000 Fellows and Members worldwide, around half of whom live in the UK.  The College promotes the highest standards of surgical practice through its examinations, and is also increasingly involved in the provision of surgical training and education. RCSEd’s commercial enterprise, Surgeons’ Hall, offers conferencing and event facilities at The Playfair Building, Symposium Hall and Quincentenary Hall, and runs the Ten Hill Place Hotel. The Royal College of Surgeons of Edinburgh is a registered Scottish charity. Charity No.SC005317