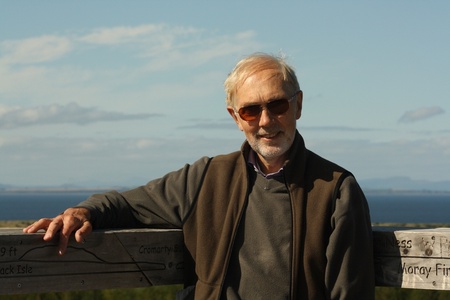 A north-east composer will see an ambition held for four decades come to fruition during a special concert at Aberdeen Music Hall on Sunday (November 18).

The work of Dr Geoff Palmer, a Lecturer in Music at the University of Aberdeen, will receive its world premiere at the event, held in association with the Sound Festival.

His ‘Cædmon Symphony’ will be performed by one of the largest musical ensembles ever to take to the stage at the Music Hall with more than 250 singers and musicians from the University of Aberdeen’s Symphony Orchestra, Choral Society and King’s College Chapel Choir under the baton of conductor Christopher Gray.

Making a guest appearance is the acclaimed violin soloist – and Dr Palmer’s daughter - Ruth Palmer, who was named ‘Young Classical Performer of the Year’ at the Classical BRITs in 2007 and has gone on to perform all over the world since. She will play Mendelssohn’s Violin Concerto.

Composing ‘A Cædmon Symphony’ and hearing its premiere is the culmination of an ambition held for more than 40 years by Dr Palmer, who lives in Alford.

He said: “This is a piece that I have been planning to write for my entire career. I first began work on it while I was still a student but at that time I hadn’t developed sufficiently as a composer to do the ideas justice.

“But I have remained determined to complete the piece and it will be a fitting way to mark my first six decades of being alive. I feel it will also be a wonderful opportunity for the members of the University Symphony Orchestra, Choral Society and King’s College Chapel Choir to showcase their great talent in what is not an easy work to perform.”

‘A Cædmon Symphony’ is inspired by the 7th-century poet and musician, Cædmon, who is said to have been originally ignorant of ‘the art of song’ but one night in the course of a dream composed a hymn about Creation.

Dr Palmer added: “In the symphony we hear music which parallels the beginnings of the cosmos as we can now begin to understand it. We witness the development of life from its precarious earliest beginnings to the perhaps equally precarious state we are in now, precipitated as we are from one crisis into the next; yet the music also rejoices, as Cædmon did, because to be acutely aware of the world can also bring the joy of consciousness.”

The premiere will build on a successful career for Dr Palmer, whose works have been regularly performed in the United States and Canada, in Scandinavia, and as far away as Japan.

In the UK his music has been performed on BBC Radio 3, in London at the Wigmore Hall, the Conway Hall, the Purcell Room and at Kings Place, and following commissions from regional festivals.

The concert begins at 7.30pm in Aberdeen Music Hall, Union Street, on Sunday November 18. Admission is £8, concessions £5 and students/under 16s £2. Tickets can be booked at http://www.boxofficeaberdeen.com/events/university-of-aberdeen-choral-society-and-symphony-orchestra-university-music-concerts-2012 or by calling Aberdeen Box Office on 01224 641 122.