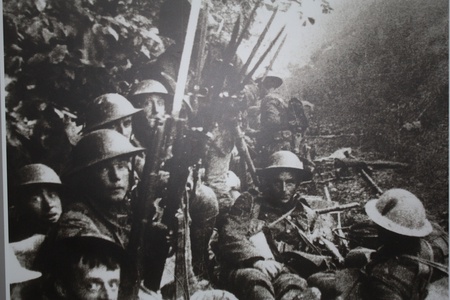 Young lives lost, communities devastated and soldiers shot for struggling with the mental scars of battle - all tragedies of the Great War which will be highlighted at free talk taking place in Aberdeen later this week.

Your King and Country Need You is the name of the University of Aberdeen organised event -taking place on Friday (November 9) at 6pm at the Suttie Centre on the city’s Foresterhill health campus - which will also help mark upcoming Remembrance Day.

This is the third talk about the First World War involving Professor Steve Heys, Professor of Surgical Oncology at the University of Aberdeen, and retired orthopaedic surgeon Tom Scotland.  Both have undertaken a number of cycling tours of Great War battle sites.

Professor Heys said: “Following the outbreak of the Great War in 1914, nearly one million men in Britain volunteered to fight for their country. Many of them first saw action, and suffered appalling casualties, at the Battle of the Somme which began on the first of July 1916.

“Our talk will look at three different dimensions of the Great War that have not been covered by our two earlier lectures and should give a fascinating and moving insight into the many desperate human tragedies both on and away from the frontline.”

Mr Scotland will discuss why so many were killed, wounded or declared missing on the Somme and he will examine the battle through the writings of war poets Siegfried Sassoon and Wilfred Owen to provide some insight into the conditions men endured.

Sassoon and Owen first met when in 1917 they were both sent to Craiglockhart War Hospital for officers in Edinburgh for very different reasons. As a direct result of this meeting, Owen began to write about his war experience during the last year of his short life, and in so doing became the most famous of all the war poets.

Professor Heys will talk about the fate of the 11th East Lancashires - better known as the “Accrington Pals” - who answered Lord Kitchener’s plea for volunteers. Around 700 men from Accrington signed up to go and fight, with just 40 men answering roll call the next day, which was devastating for their home town.

Professor Alexander will discuss the psychological impact of war - such as Post Traumatic Stress Disorder - and explain how it was managed then and how it is managed now. His part of the talk will also cover the tragedy of the British soldiers shot at dawn by the Army for ‘cowardice’  but who were more likely suffering from PTSD.

Professor Heys added: “Previously our talks have discussed how abdominal, orthopaedic and plastic surgery has its roots in war-time surgery, as well as the many challenges that were faced by the nation, medics and soldiers during the First World War.

“We hope the public will once again be supportive of this act of remembrance as we approach the anniversary of the day the guns fell silent on the Western Front.”

Anyone is welcome to attend the event but booking is recommended via the event website or via Emilia Grecka on e.grecka@abdn.ac.uk or telephone: 01224 437973.