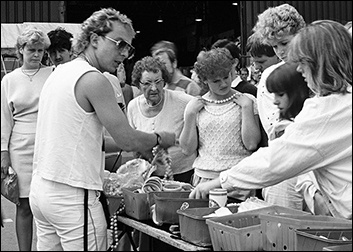 Some of the UK’s best known entrepreneurs and businesses owe their success to their roots in market trading.

Tesco, Morrisons, Marks & Spencer and Lord Alan Sugar all began their business lives in this form of retailing.

But the nature of markets has changed significantly in recent years and a new exhibition opening in Aberdeen on Monday (November 5) will pay homage to a ‘dying art’ of one particular type of market selling – pitching (or ‘grafting’).

'Life's a Pitch! And Then You'd Buy’ captures an era in which market pitching was a common sight on markets throughout the UK.

Organised by Dr Colin Clark, from the University of Aberdeen’s Business School, the exhibition features photographs taken as part of a research project between 1984 and 1994.

It is supported by the Economic and Social Research Council (ESRC) and forms part of the organisation’s nationwide Festival of Social Science week, running from Nov 3-10, which offers a wide variety of insights into some of the country's leading social science research and how it influences our social, economic and political lives.

Dr Clark said: “Between 1984 and 1994 I travelled around England with my colleague Trevor Pinch, now a professor of sociology at Cornell University, USA, video recording those market traders who gather a crowd around their stalls and then pitch their goods with an elaborate verbal and visual sales routine.

“We quickly realised we had stumbled upon a bunch of spellbinding orators and ‘patter-merchants’ who employed a highly sophisticated form of grass-roots marketing rarely found in academic textbooks.

“In 1984, when we commenced our research project, pitchers could be found on almost every British market. During 2011-12, though, when we revisited many of the markets from our original study, we found that pitching – with its roots going back well before medieval times – had all but died out.

“Today, British markets face a highly uncertain future; many of the traditional street markets are in decline and pitching has become a dying art.”

'Life's a Pitch! And Then You'd Buy’ includes many of the unique photographs taken by Clark and Pinch during the 1980s which show the pitchers in full flow.

Dr Clark said that when they began to look into where some of the traders captured in the exhibition pictures had moved on to they found they had developed very successful careers.

“One former pitcher, Tony Jordan, is now a top screenwriter and TV series creator and producer who has drawn on the insights and experience he gained from the markets when working on BBC programmes including EastEnders, The Hustle and Life on Mars.

“Another former British pitcher, Anthony Sullivan, has not only sold over $1bn. of goods on US infomercials and is now widely recognised as ‘the undisputed king of infomercials in America’, he also created, hosts and produces the Discovery Channel’s Pitchmen TV series.

“We knew when we began to film these traders that there was something very special in their knowledge, awareness and understanding of human behaviour.

“Their very close proximity to their potential customers often meant that, in order to sell successfully, they had to develop an extraordinary sensitivity to the smallest changes in the behaviour of the shoppers that gathered at their stalls.

“By video recording them we were able to put marketing ‘under the microscope’ and to examine the pitchers’ verbal and nonverbal selling skills, as well as the behaviour of the shoppers in their audiences, in extremely fine detail – frame-by-frame, word-by-word, gesture-by-gesture.

“Our study showed that this form of selling didn’t fit into any textbooks on economics or psychology and actually was a textbook case of real life social and interactional skills being deployed to persuade people to buy the goods on offer.”

'Life's a Pitch! And Then You'd Buy’ is on display in the upper gallery of the James Mackay Hall at the Kings College Conference Centre, University of Aberdeen. Entry is free of charge and it is open to the public Monday to Friday from 9.00am to 5.30pm.

For more details and to view an online version of the photographic exhibition visit www.marketpitching.com

Further editorial material (including audio and text excerpts of market pitching sales routines) is available on the www.marketpitching.com website.