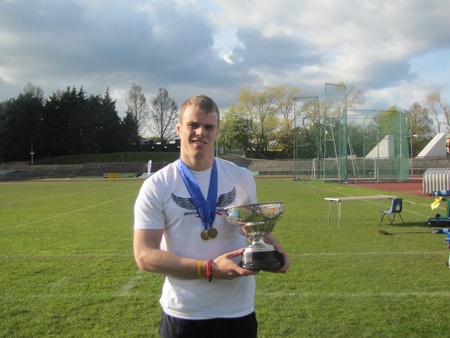 Five sporting students at the University of Aberdeen are among those chosen nationally for special support as potential Olympic champions.

More than 150 talented athletes who combine their training with study at colleges and universities across Scotland will receive tailored support this academic year.

Congratulating the successful Aberdeen student athletes, Head of Sport at the University of Aberdeen Donald Pirie said "It is fantastic news that the University of Aberdeen have five individuals who have been selected for this National Sport Scholarship Programme for high performance student athletes. All the recipients are well deserving of this award and are all competing in their chosen sport at national, international, world and Olympic level competitions.

"It is testament to the world class facilities that Aberdeen Sports Village now offers our students that the number of athletes selected for this award from the University of Aberdeen has increased each year over the past three years. I am sure this will continue as the new Aquatic Centre opens and the University of Aberdeen becomes an even more attractive option for high performance student athletes."

Clare McWilliams, President for Sport at the Aberdeen University Students Association, added “I would like to pass on my congratulations to all the athletes from the University of Aberdeen who were successful in obtaining these scholarships. To see the talent and hard work of these athletes being rewarded is extremely encouraging to see. I can only hope it will spur on even more athletes from this University to raise their level of performance so they too can benefit from the Winning Students Scholarship programme. I look forward to hearing about their future progress and achievements.”

Athlete Tom Holligan is an 18-year old first year Law student from Edinburgh. He said “I'm absolutely delighted to have been selected as a beneficiary of the Winning Students Scholarship. Being a student is a very difficult time financially anyway, so having to balance it with sporting commitments is very hard indeed. This will go a long way to help me really focus on my training so that I can achieve my goals.

“This year, I just want to progress my times even further on the track as 2014 looms nearer, with my main focus being gaining selection for the U20 GB team for the European Junior Championships in Italy in July. The University has been very supportive in the weeks I have been here and the facilities and coaching at ASV were definitely influential in my decision to study at Aberdeen.”

Fellow new Winning Student Becky Wain is 21 years old, originally from Monifieth, Dundee and currently in her 4th year studying Geology and Petroleum Geology. Becky, whose sport is Modern Pentathlon said “Being awarded the Winning Students Scholarships support is fantastic! It is great to be recognised as one of Scotland's talented athletes and the funding is a brilliant support towards paying for sports massage and living costs that I otherwise struggle to fund on my own. The programme will provide me with the extra support to help me towards achieving my goals and ambition to compete at the 2016 Olympic Games.

“This year I am moving up from junior to senior level in Modern Pentathlon. I am aiming to improve my current GB ranking of 7th in the open women category and so qualify for places to compete for GB on the Senior womens circuit at Internationals in 2013. My long term ambition is to compete with a medal winning performance in the 2016 Olympic Games."

Hockey star Tom O'Kelly is 21, from Aberdeen and studying Geography. He said "I'm very happy to get the award for a second year. It can be difficult to balance Uni and hockey but I am happy to get the support from Winning Students. My sporting ambition this year is to step up into the senior level of hockey after a successful summer with the under 21s. I also hope to play as many matches as I can for the Uni whilst still playing for Gordonians in the Scottish National League. The biggest benefit of the award scheme is the physio allowance which I found particularly helpful last year when I tore a muscle in my back. The guys at Spear were a great help and managed to get me back into hockey before the European Championships in summer.

Winning Students is now in its fifth year, and eleven current and former recipients were competing at the London 2012 Olympics and Paralympics.

At the Delhi 2010 Commonwealth Games, no fewer than 29 Winning Students represented their countries, with two gold medals and one silver placing the scholarship programme equivalent to 18th place in the final standings.

Many students are now turning their attention to gaining selection for the Glasgow 2014 Commonwealth Games and new recruits to the programme will be buoyed by a recent survey of the programme revealing 62% of students cited an improvement to their sporting performance since gaining scholarship support.

A full list of 2012-13 Winning Students scholars is available to view at: www.winningstudents-scotland.ac.uk/the-athletes/2012-13

Winning Students is Scotland’s national sports scholarship programme for student athletes. Funded by the Scottish Funding Council and managed by the University of Stirling as Scotland’s University for Sporting Excellence, high performance student athletes in member colleges and universities across the country are supported with scholarships of up to £5,500 each year.

Athletes are identified and nominated directly by the appropriate governing body of sport in: badminton, curling, football, golf, hockey, judo, orienteering, swimming, tennis and triathlon. Students competing in other sports can be nominated for an Individual Scholarship.

The programme has established a network of Scottish colleges and universities with the capacity to support the nation’s best student athletes. For more information, visit: www.winningstudents-scotland.ac.uk