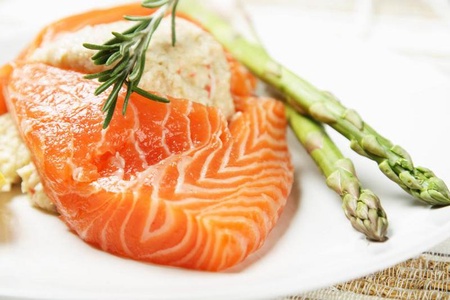 University of Aberdeen researchers are to compare the effects on human health of eating farmed salmon fed two different diets.

The scientists want to see whether feeding farmed fish a more sustainable feed containing more vegetable oils but less omega-3 fatty acids, and possibly other nutrients, has any impact on potential health benefits in those eating the fish.

It is already acknowledged that fish consumption can help protect against stroke and lower the risk of mortality from coronary heart disease.

However the exact way in which fish is beneficial to health is not fully understood.

Dr Baukje de Roos, from the University of Aberdeen Rowett Institute of Nutrition and Health, is leading the study. She said: “It is important to find out how eating fish can help human health.

“In the UK it is recommended that people eat at least two portions of fish per week, one of which should be oily fish. Despite this, the majority of the UK population do not consume enough fish, particularly oily fish.

“Fish farming in Scotland is playing an increasingly important role in the provision of fish for human consumption.

“Farmed fish have the potential to take the pressure off wild fish stocks, whilst meeting the dietary needs of the population for omega 3 fatty acids and other key nutrients such as vitamin D.

“Also issues with sustainability of raw materials for fish feeds mean that fish farmers may have to reformulate their fish diets.

“This means that farmed fish will be raised partly on vegetable oils rather than fish oils and this might reduce the content of omega-3 and other important nutrients, thereby reducing potential health benefits for consumers.”

The Rowett Institute has been commissioned by the Scottish Government’s Rural and Environment Science and Analytical Services Division (RESAS) to assess how pressures from sustainability on methods of production may affect the health giving properties of fish.

The salmon being used in the study are currently growing on a fish farm on the West Coast of Scotland in Loch Ailort by Marine Harvest, the world's leading seafood company and largest producer of farmed salmon.

The different fish feeds are being developed and prepared by BioMar, one of the leading suppliers of high performance fish feed to the fish farming industry.

The study will start next February but researchers are recruiting healthy male and female study volunteers from the local area now, who should be aged between 35 and 75 years and be prepared to eat salmon twice a week.

All volunteers will also receive a recipe book that should provide them with plenty of ideas on how to prepare and cook the salmon.

Anyone wishing to volunteer or who wants more information on the FISH DISH study should contact Mr David Bremner on 01224 438785 or email d.bremner@abdn.ac.uk or Dr Baukje de Roos on 01224 438636 or email b.deroos@abdn.ac.uk.