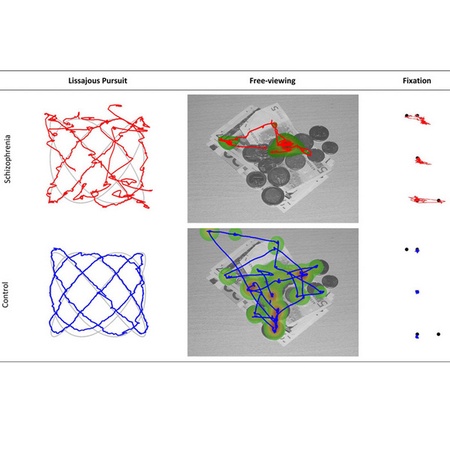 There is a long history of research on impaired eye movements associated with schizophrenia.

Now a new study led by scientists from the University of Aberdeen has reported a model of testing which demonstrated 98% accuracy in distinguishing between those with and without schizophrenia.

Using a series of simple viewing tests, the researchers, whose work is published in a new paper in Biological Psychiatry, explored the ability of eye movement tests to identify schizophrenia cases from healthy control subjects.

Their findings could speed up detection of the condition and they are now examining whether the tests can be used for earlier intervention in major mental illness.

The study was led by Dr Philip Benson and Professor David St Clair and involved a range of eye tests where volunteers were asked to track slow moving objects slowly with their eyes (known as smooth pursuit), inspect a variety of everyday scenes (free viewing) and given instructions to keep a steady gaze on a single unmoving target (fixation tasks).

Dr Benson said: “It has been known for over a hundred years that individuals with psychotic illnesses have a variety of eye movement abnormalities, but until our study, using a novel battery of tests, no one thought the abnormalities were sensitive enough to be used as potential clinical diagnostic biomarkers.

Several methods were then used to model the data and the accuracy of each of the created algorithms was tested by using eye test data from another group of cases and controls. Combining all the data, one of the models achieved 98% accuracy.

Professor St Clair said: “We are keen to explore how best our findings can be developed for use in routine clinical practice.

“Typical neuropsychological assessments are time-consuming, expensive, and require highly trained individuals to administer. In comparison, these eye tests are simple, cheap, and take only minutes to conduct.

“This means that a predictive model with such precision could potentially be incorporated in clinics and hospitals to aid physicians by augmenting traditional symptom-based diagnostic criteria.

“The next thing we want to know is when the abnormalities are first detectable and can they be used as disease markers for early intervention studies in major mental illness?”

The authors’ affiliations, and disclosures of financial and conflicts of interests are available in the article.

John H. Krystal, M.D., is Chairman of the Department of Psychiatry at the Yale University School of Medicine and a research psychiatrist at the VA Connecticut Healthcare System. His disclosures of financial and conflicts of interests are available here.

Biological Psychiatry is the official journal of the Society of Biological Psychiatry, whose purpose is to promote excellence in scientific research and education in fields that investigate the nature, causes, mechanisms and treatments of disorders of thought, emotion, or behavior. In accord with this mission, this peer-reviewed, rapid-publication, international journal publishes both basic and clinical contributions from all disciplines and research areas relevant to the pathophysiology and treatment of major psychiatric disorders.

The journal publishes novel results of original research which represent an important new lead or significant impact on the field, particularly those addressing genetic and environmental risk factors, neural circuitry and neurochemistry, and important new therapeutic approaches. Reviews and commentaries that focus on topics of current research and interest are also encouraged.

About Elsevier
Elsevier is a world-leading provider of scientific, technical and medical information products and services. The company works in partnership with the global science and health communities to publish more than 2,000 journals, including The Lancet and Cell, and close to 20,000 book titles, including major reference works from Mosby and Saunders. Elsevier’s online solutions include ScienceDirect, Scopus, Reaxys, MD Consult and Mosby’s Nursing Suite, which enhance the productivity of science and health professionals, and the SciVal suite and MEDai’s Pinpoint Review, which help research and health care institutions deliver better outcomes more cost-effectively.