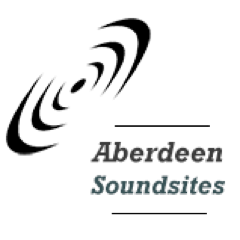 The public are being invited to take part in an exciting new public artwork that will see the creation of a sound map of Aberdeen.

Sound Sites, which will be launched this Saturday, 27 October as part of the annual sound Festival of New Music, has been commissioned by the City of Aberdeen and will be led University of Aberdeen professor and sound specialist, Pete Stollery. An online map of the city is being created and by clicking on a pin people will be able to hear a recording of that place.

“In our busy lives we have a tendency to block out or ignore many of the sounds around us,” say Pete Stollery. “Through Sound Sites we hope to reintroduce people to the rich sensorial experience that Aberdeen offers.”

In the coming months it is hoped that places across the city will be documented both by individuals and groups through audio recordings and text. Pete Stollery has already made a number of sample recordings that range from a football crowd at Pittodrie to work in the docks, from a bus travelling over Aberdeen’s cobbled streets, to a bird singing in the Botanic Gardens. These will be available to listen to at the launch event when people will also be able to learn more about how to make their own recordings and upload them on to the map.

“Everyone can get involved with Sound Sites,” adds Professor Stollery, “whether as individuals or through school and community groups. I hope that people from across Aberdeen will join us in creating a sound picture that not only reflects the experience of living in Aberdeen, but also documents the places the mean most to its citizens.”

Once the map is live people will also be able to respond to the sounds by uploading their comments, these might include current experiences or memories of how a particular site may have sounded in the past.

The launch of Sound Sites will be from 2pm – 5pm in Aberdeen Central Library Media Centre, Rosemount Viaduct Aberdeen AB25 1GW. Drop into this free event and learn more about this fascinating project. Further information at www.sound-scotland.co.uk

Sound Sites is Public Art Aberdeen's first Community Commission, supporting and promoting the role of public art in Aberdeen. The commission and website, www.publicartaberdeen.com are in recognition of the important role Aberdeen city council sees for art and culture in developing Aberdeen into a vibrant, creative and ambitious city.

Pete Stollery is a composer, teacher and performer based in Aberdeen, in the North East of Scotland. Pete is recognised for his work in the electroacoustic medium. His work has performed throughout the world and has been awarded numerous prizes including Musica Nova (Prague), Electronic Arts Award (Sweden), Prix Destellos (Argentina), Ai-Maako (Chile), Pierre Schaeffer Award (Italy) and CIMESP (Brazil). He created the music and sound design for two of the UK’s most successful cultural attractions Our Dynamic Earth in Edinburgh and Magna in South Yorkshire

Sound Festival is the Scotland’s premier festival of new music. The festival brings together a large range of different genres of music to appeal to a wide variety of tastes and encourage people to discover new sounds and widen their musical horizons.