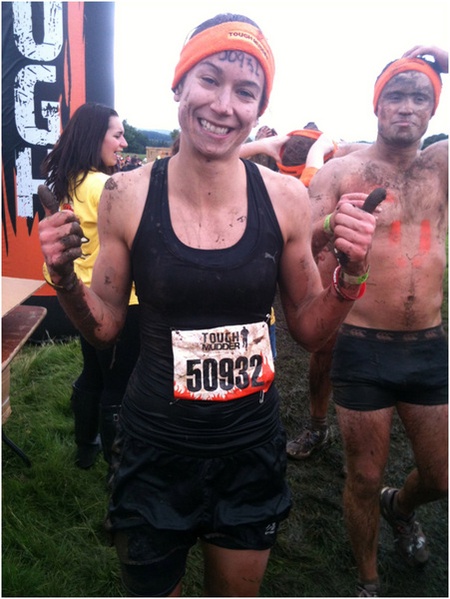 A second year medical student is to take on the planet’s most extreme assault course, which will see her crawl through icy tunnels, battle up cliffs of mud and scale walls more than twice her own height.

Katy Emslie, 23, from the University of Aberdeen, is the only British woman to qualify for the World’s Toughest Mudder – a hardcore obstacle course designed by British Special Forces to test competitors’ strength, stamina, mental grit, and camaraderie to the limit.

Running in New Jersey on November 17-18 the World’s Toughest Mudder is the culmination of Mudder events around the world and Katy earned her place after finishing in the top five per cent of all participants.

She got a taste for the event at Scotland’s Tough Mudder, held at Drumlanrig Castle, Dumfriesshire, in July, but the former Banchory Academy pupil says a much harder challenge is in store when she travels to New Jersey for the World event.

“I’ve always been very sporty and I love the outdoors,” she said. “I decided I wanted to take on some sort of challenge to raise money for charity after my step father died from oesophageal cancer in 2008.

“I knew from then onwards that I would test myself to support Cancer Research but I wasn’t inspired by the idea of a marathon or a 10k.

“I wanted something that was a bit more extreme and all-round and when I saw a video of the Mudder events I decided that was for me.”

For the World’s Toughest Mudder competitors have 24 hours to complete the course as many times as they can but the exact distance and obstacles Katy will face will only be revealed when she starts.

“The Scottish event involved 22 obstacles but for the World’s Toughest Mudder we’ll be facing 40,” she added.

“We don’t know exactly what they will be but last year there was a 12 foot wall, pool of ice, tunnels filled with freezing mud,  and a sprint through a field of live wires — some carrying as much as 10,000 volts of electric shock.

“The winner last year suffered frostbite in her toes with 90% of the other participants dropping out, and many were treated in hospital with broken bones or hypothermia afterwards.

“I’m really hoping to complete it and show how tough Scottish – and British – women are as I feel honoured to be the only female from the UK to qualify.”

But Katy not only faces a difficult challenge in overcoming the course – to take part she is taking a week off her medical studies and is currently juggling a heavy work load with her training.

“I train for two hours a day five days a week and a medical degree is very intensive so it’s tough but I’m not afraid of hard work,” she said.

“I’ve already completed an undergraduate science degree so I think that’s really helped me to manage my time.

“I’ve also had great support from my tutors who have allowed me to take time off and will help to ensure that I catch up when I return.

“I’m really grateful for all the support I’ve had so far and I’ve raised more than £700 for Cancer Research UK but I’m hoping that figure will grow.

“It is also expensive to travel over to New Jersey to compete so I’d love to hear from anyone who can help with costs or support me in any other way.”

Katy, who would like to pursue a career in expedition medicine when she completes her studies, has a Just Giving page www. justgiving.com/katy-emslie and can be contacted by email on kemslie89@gmail.com