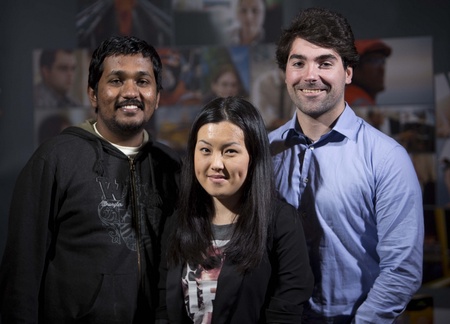 Two University of Aberdeen students participated in a gruelling academic challenge to finish in the top three at the first annual Energy Apprentice challenge organised by SPE Aberdeen.

The event was organised by volunteers from SPE Aberdeen’s Young Professionals (YP) committee, who are planning for the Energy Apprentice to become an annual fixture in the industry’s calendar of events, as well as extending the competition to other UK cities.

The half day event took place at the University of Aberdeen on Wednesday 17 October. It challenged participants to stand out amongst their peers by impressing panellists over a series of five rounds. The first four stages included a quick fire quiz, an energy investment challenge, speed dating style interviews and a ring of fire buzzer round.

SPE Aberdeen Chairman Anthony Onukwu said: “The aim of the Energy Apprentice was to give students the opportunity to practise skills and experience situations and questions similar to those in a graduate assessment centre or interview situation. The level of talent we saw during the event was hugely promising and it is important that we continue to foster this potential."

The Energy Apprentice, which was sponsored by Maersk Oil and Schlumberger, saw students from Aberdeen, Robert Gordon, Heriot Watt, Dundee and Edinburgh universities battle it out for the top spot.

The closely contested grand finale saw panellists from ConocoPhilips, ITF Energy and Schlumberger decide who would be named this year’s Energy Apprentice and win £300 towards their studies. The top slot went to RGU student Lalit Bhamare.

Anthony Onukwu said, “SPE Aberdeen has supported students for many years by providing scholarships and bursaries but we also want to fully prepare them for what employers in the oil and gas industry look for from candidates. The competition for the title was impressive and truly demonstrated to students that to obtain a graduate position, they must stand out from the crowd.

“The involvement from Maersk Oil, Schlumberger and the panellists highlights the significance of such events in the oil and gas industry. It is hugely important that major players through to smaller companies in the industry support initiatives which are developing a sustainable workforce for the future.

“I would like to thank Jai Chainani of Chevron, chair of the YP committee, and his committee members for organising such a successful, positive event and I look forward to seeing it return next year.”