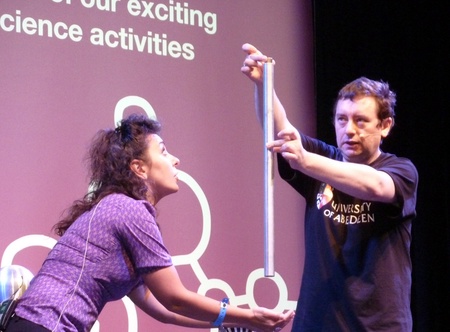 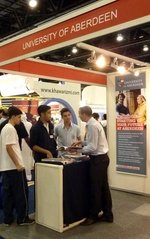 The University of Aberdeen has played a role in two major educational events in the Middle East.

The University was the only institution to have a presence at both NAJAH - the Middle East’s leading training and careers fair - and 2012 Abu Dhabi Science Festival.

Dominic Milne, acting head of the International Office, promoted the University’s undergraduate and postgraduate course over the three-day NAJAH event, which took place in an adjacent hall to the Abu Dhabi Science Festival where Dr Ken Skeldon, Head of public Engagement, presented a science show.

Tens of thousands have visited the festival, held in a purpose built theatre inside Abu Dhabi’s National Exhibition Centre from October 10-20.

Dr Ken Skeldon teamed up with Arabic co-presenters and translators for the Arcs and Sparks electricity show.

The Aberdeen event was one of 11 other headline shows selected by the organisers from across the world’s science engagement community.

The festival, which is an initiative of Abu Dhabi Government’s Technology Development Committee, is aimed at encouraging young people to consider science as a career choice.

As well as  theatre shows, it also featured hundreds of hands-on workshops led by international and local teams all highlighting the many real-world applications underpinned by science and technology.

Dr Skeldon said: “Despite only being in its second year, the event is one of the largest science festivals in the world inviting some of the world’s top engagement professionals. For Aberdeen to be headlining in one of its major venues is fantastic, not just from the profile gained among the schools but for the opportunities in cross-working with the international engagement community.

“The feedback from public and schools to the Aberdeen event has been hugely positive – with many comments and photographs being posted on the Festival’s Facebook and flicker sites as well as on the festival’s twitter feeds.”

At NAJAH, the University of Aberdeen’s stand was visited by thousands more senior Emirati school pupils.  The University was the only institution to have a presence at both events.