Curator to reveal the stories behind the exhibits
18 October 2012 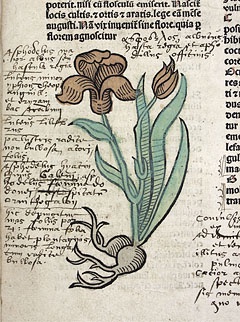 One of the curators of an exhibition which includes some of the earliest recorded interpretations of the natural sciences will share her insights into rare books and manuscripts – and what we can learn from them – at an event on Saturday (October 20).

Jane Pirie, Rare Books Cataloguer with the Special Collections Centre at the University of Aberdeen will tell the stories behind the exhibits of the Pharmacopoeia exhibition currently running at the Sir Duncan Rice Library on Bedford Road.

From 2pm to 2.45pm she will explain why the items are considered to be important and how they came to be held in the University of Aberdeen’s Special Collections.

The exhibition includes early records of plants for specific medical treatments which were recorded in texts such as the late 15th century De Hortus Sanitatis.

De Hortus Sanitatis, which translates as the Garden of Health, shows some of the medical methods practiced in Scotland five centuries ago and is one of the earliest European medical texts. It contains detailed writings and annotated illustrations on plants, herbs, animals, and minerals.

Mrs Pirie said much can be learned from notes added to the books and manuscripts and she will delve behind these to look at what they can tell us about past lives and the connections of the exhibits to the north-east.

“Many of the people who collected and used these rare and special books left their own notes and signatures within the pages as a mark of provenance,” she added.

“The importance of these books is not just the ownership but the people involved in the making of the books as well and their connections with the authors, the printers and the illustrators.”

Mrs Pirie’s talk and the exhibition are free of charge and open to all. Pharmacopoeia runs in the Gallery of the Sir Duncan Rice Library until December 1.