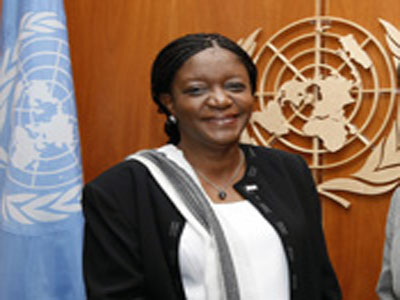 University staff, students and members of the public have the opportunity on Thursday, May 9, to hear from the UN Secretary General’s Special Representative on Sexual Violence in situations of conflict.

The University of Aberdeen’s Centre for Sustainable Development and the School of Law is hosting the event, and welcoming Zainab Bangura as speaker.

On April 11, a historic declaration was signed in London by the G8 foreign ministers who pledged to work together to combat sexual violence in situations of conflict.

Sharing the platform with the UK’s foreign secretary William Hague were actress Angelina Jolie in her personal role as Special Envoy of UN High Commissioner for Refugees, and Ms Bangura.

The public event, entitled Ending impunity for sexual violence, take place on Thursday, May 9, from 1-2pm in the Arts Lecture Theatre, King’s College.

The Arts Lecture Theatre is accessed off King Street near the roundabout with St Machar Drive. Entry is free and there is no requirement to book.

Speaking on the G8 Declaration at the event in London Ms Bangura said: “Today we join hands and lift our voices in unison, breaking silence on history’s oldest and least condemned crime – sexual violence used as a weapon of war.

“Your Declaration today further affirms our conviction that sexual violence in conflict is a fundamental threat to international peace and security, and as such requires an operational and strategic security and justice response.”

Dr Hilary Homans, Director of the Centre for Sustainable International Development, said: “We are delighted to welcome Zainab Bangura to Aberdeen – her work to support education, health, development, and prevent violence is exemplary.

“This is a tremendous honour for the University and provides further support for our work towards global zero tolerance for gender-based violence.

“It is also most timely as the visit coincides with the finalisation of the UN report I have been working on to chart progress made amongst uniformed service personnel in combating sexual violence in the Asia and Pacific region.”

For further information about the event, please visit: www.abdn.ac.uk/sustainable-international-development/events/2753/

In June 2012 United Nations Secretary-General Ban Ki-moon announced the appointment of Zainab Hawa Bangura of Sierra Leone as his Special Representative on Sexual Violence in Conflict at the level of Under-Secretary-General. Prior to this, Ms Bangura was the Minister of Health and Sanitation for the Government of Sierra Leone, and brings to the position over 20 years of policy, diplomatic and practical experience in the field of governance, conflict resolution and reconciliation in Africa. She was previously the second female Minister of Foreign Affairs and International Cooperation, including Chief Adviser and Spokesperson of the President on bilateral and international issues. Ms. Bangura has been instrumental in developing national programmes on affordable health, advocating for the elimination of genital mutilation, managing the country’s Peace Building Commission and contributing to the multilateral and bilateral relations with the international community.

The Declaration signed in April includes the following commitments: