Surgery most effective for persistent heartburn and reflux
18 April 2013 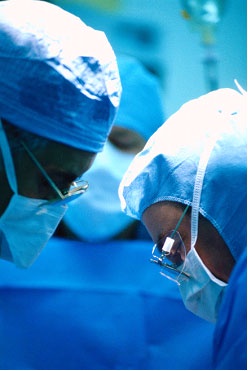 Surgery is more effective than medicine at providing relief from the symptoms of persistent heartburn and reflux, a University of Aberdeen-led study has found.

Persistent heartburn and reflux are features of what is known as gastro-oesophageal reflux disease (GORD). It’s thought that between 20% and 30% of Western adults sometimes experience these symptoms.

While the majority only have mild symptoms and need little, if any, medication - for some the problem is so chronic that it impacts on their quality of life.

The REFLUX study aimed to find out whether taking medication or having an operation is the better treatment for people with chronic GORD.

More than 800 patients who had had GORD for more than 12 months were recruited from 21 hospitals across the UK: 178 patients were randomly allocated to surgery and 179 to medicine.  A further 261 patients chose to have surgery and 192 chose to take medicine. Patients were followed up for five years after they had been treated.

Professor Craig Ramsay, of the University’s Health Services Research Unit, said of the findings published today in the British Medical Journal: “At one year, people who had had surgery had better relief of their symptoms than those on medication. In this new report we have shown that was also the case for patients who had had surgery after five years.  The worse a patient’s symptoms were at the start of the study, the greater the benefit of surgery.

“Any surgery carries some risk but there were only a few complications among those who underwent anti-reflux surgery. Other studies have suggested the operation can lead to other symptoms, including difficulty swallowing, wind and being unable to vomit, but these types of symptoms were reported by similar proportions of people both in the surgery and the medication groups in our trial.”

Professor Zygmunt Krukowski, a surgeon at Aberdeen Royal Infirmary, added: “The results of this study will help us offer the most appropriate treatment to patients who suffer from reflux disease. Fortunately, modern medicines relieve the symptoms for most patients, but surgery, when appropriate, can do even better”.

Professor Craig Ramsay is available for interview. To arrange, contact Jennifer Phillips on 01224 273174.