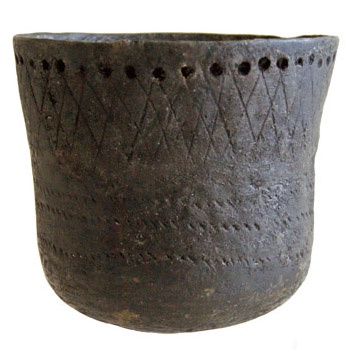 Hunter-gatherers living in glacial conditions produced some of the world’s earliest pots in order to cook fish, according to the findings of a pioneering new study which reports the earliest direct evidence for the use of ceramic vessels.

The research involved staff from the Department of Archaeology at the University of Aberdeen, and other scientists from the UK, Sweden, the Netherlands and Japan. The international team carried out chemical analysis of food residues in pottery up to 15,000 years old from the late glacial period, the oldest pottery so far investigated. It is the first study to directly address the question, ‘Why did humans make ceramic pots?’ The research has been published in Nature.

The research team was able to determine the use of a range of hunter-gatherer “Jōmon” ceramic vessels through chemical analysis of organic compounds extracted from charred surface deposits.

The samples analysed are some of the earliest found in Japan, a country recognised to be one of the first centres for ceramic innovation, and date to the end of the Late Pleistocene, a period of sudden climate change, when the world was emerging from the last major Ice Age. At this time humans were still living as hunter-gatherers, and were in the process of adjusting to the new environmental conditions by developing a range of new behaviours – the emergence of pottery is one of a series of important technological and cultural developments that take place at around this time.

Until quite recently archaeologists had linked the invention of pottery to the arrival of farming, but it is now becoming increasingly clear that ceramic cooking pots were a much older hunter-gatherer innovation. These first ceramic containers must have provided prehistoric hunter-gatherers with attractive new ways for processing and consuming foods but until now virtually nothing was known of the particular resources that were prepared in in them.

The researchers recovered diagnostic lipids from the charred surface deposits of the pottery with most of the compounds deriving from the processing of freshwater or marine organisms. Stable isotope data support the lipid evidence, and suggest that the majority of the 101 charred deposits, analysed from across Japan, were derived from high trophic level aquatic foods.

The paper ‘Earliest evidence for the use of pottery’ is published in Nature: http://www.nature.com/nature/journal/vaop/ncurrent/full/nature12109.html