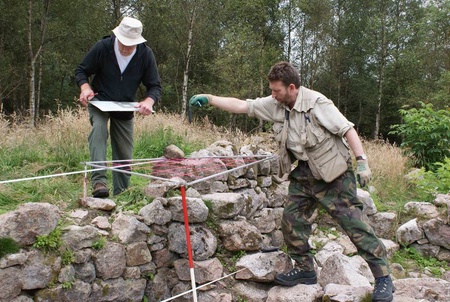 They were a band of squatters who set up a community on the foot of the North-East’s most famous peak in the 19th century and were the source of much local debate at the time, but surprisingly little is known about the Bennachie Colonists.

Described in accounts at the time as possessing dubious morals and backwards ways, an archaeological dig by the University of Aberdeen and the Bailies of Bennachie, a local community group, aims to provide a more balanced assessment about how the community lived.

The ‘commonty’ (common land) of Bennahice was settled sometime between 1801 and the 1830s.

“They weren’t popular with some people because they were effectively living rent-free on ground that was supposed to be communal”, said University of Aberdeen archaeologist Dr Jeff Oliver, who is coordinating the dig.

“Accounts describe them as a marginal community ‘on the edge’ scratching a living from the slope of Bennachie – a harsh, nutrient impoverished landscape. Eventually they became associated with a story of resistance against the local lairds who eventually seized the commonty for themselves in 1859 using the courts in London. After this the colonists effectively became tenants.

“Our working theory is they received a lot of bad press from some of the neighbouring locals - and all sorts of slanderous things were said about them, probably because they weren’t initially paying rent. However what may be more accurate is that they were very similar to other agricultural communities of the time and this study will help to provide a more nuanced assessment of this.

“The Bennachie colonists are a particularly fascinating group because there is a reasonably good archive of information written by various historical commentators – but of course not by the settlers themselves – so working closely with our community collaborators a big part of our work will be in comparing the written accounts with what the archaeology reveals.

“Some of colonists were eventually evicted for refusing to pay rent. And there were apparently on-going tensions between the group and the surrounding estates. In one story the local henchman of the Balquhain estate are said to have come and burned one of the crofters out of his house.

“Most of the original colonists had moved off the land by the 1880s but one crofter, George Esson, lived on the land until his death in 1930 after which time the hillside was completely abandoned.”

Working with the Bailies of Bennachie, the University of Aberdeen team is undertaking surveys and excavations of the colony site to provide a ‘micro history’ of life on the hill.

“The conflict between tenants and landlords and people being removed from their land is an important theme in 18th and 19th century Scottish history,” explained Dr Oliver. “Our work at Bennachie provides an important and new connection to this because we know much less about these kinds of tensions within the northeast.

“The research is doubly important because it is being carried out with the local community. An important part of the project is engaging members of the public who are passionate about history and about archaeology. What we hope to achieve is to take archaeology out of the ivory tower and make it more accessible to others. Ultimately we are aiming for a more sustainable kind of archaeology, which is not totally controlled by professionals and or academics.

“So far we’ve held a number of educational events on the hillside with the Baillies and it’s a really enjoyable and worthwhile enterprise. A recent grant by the Arts and Humanities Research Council is going to allow us to carry out a much more intensive study over the balance of this year and we hope to encourage others to participate.”

The project will undertake a number of survey events including an excavation in the summer. For more information about the project please see the Bailies of Bennachie web site: http://www.bailiesofbennachie.co.uk/bennachie-landscapes/