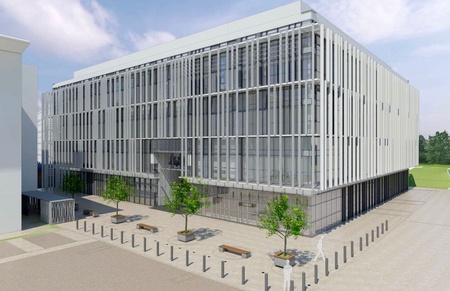 The University of Aberdeen has selected Lend Lease, the integrated property and infrastructure group, as main contractor for the new Rowett Institute for Nutrition and Health building on the Foresterhill health campus.

The new building will replace the existing Rowett Institute site, and will confirm Aberdeen as a world leader in the study of food and health.

Work will begin in April on the new facility, in the year in which the Rowett celebrates a hundred years of research at the forefront of national and global issues in nutrition. Completion is due late 2014, following which staff will relocate early in 2015 from the current site at Bucksburn which will then become surplus to requirements.

The new building will be at the north side of the Foresterhill site, to the immediate west of the Institute of Medical Sciences and to the north of the Suttie Centre for Teaching and Learning in Healthcare.

The glass-fronted four- storey building has been designed by architects Halliday Fraser Munro and will include the most advanced Human Nutrition Unit in the UK, in which human volunteers will help scientists study the complex relationship between diet and health.

“Gordon Anderson, Lend Lease’s executive general manager, said: “Being named preferred main contractor for the Rowett Institute is a great result for Lend Lease. This project was identified in our business plan as a key win, further cementing our presence in the North East of Scotland.

“We are particularly excited about working with the University of Aberdeen and Halliday Fraser Munro to create a building that is fitting to hold one of Scotland’s most important research institutes.

“We are fully committed to the North East of Scotland, and have been appointed to Aberdeenshire Council’s Capital Works Framework. We are developing strong relationships in the region.”

Professor Peter Morgan, University Vice-Principal and Director of the Rowett Institute said  “We are now at the really exciting phase of this project, which will bring our new state of the art research building to life.  The promise of this new facility has already attracted new high calibre academic appointments to the University.

“The Rowett is already at the forefront of the UK’s research capability in nutrition.  With rapidly growing rates of obesity much more work is needed, particularly when it comes to understanding how and why people eat in the way that they do and what can be done to change eating behaviour. Rowett research also supports the food and drink industry to produce healthier products.

Rowett Institute for Nutrition and Health

Since its founding by Nobel Peace Prize winner John Boyd Orr, Rowett research has contributed not only to new scientific knowledge, but also to new understanding of issues including poverty and nutrition, and more recently of diet and health, underpinning government policy and providing research for the food industry to help drive economic growth.

In recent years the Rowett, which merged with the University in 2008, has orientated its research programmes to focus on the role of nutrition in chronic health problems such as obesity and diabetes, and attempts to unravel the mechanisms whereby what we eat either promotes or protects us from the development of some of these diseases. Proximity to health economics and health psychology expertise – in addition to medical research laboratories - will be an added advantage in tackling these complex issues which are now vital to society, public health and health services.

The Rowett is a major research provider for the Scottish Government, and the core programme is funded by the Scottish Government Rural and Environment Science and Analytical Services  Directorate (RESAS). The degree with which the issues being researched resonate with the priorities of national and international research funders - in particular those of the UK Government, the Research Councils and EU Framework programmes -means that research income from these sources is growing.