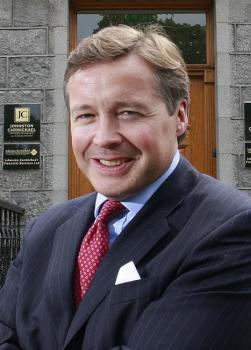 An Aberdeen businessman has been appointed chairman of the University of Aberdeen Development Trust, which aims to raise funds in order to add value to university life while supporting the University’s commitment to excellence and innovation.

Mr Manson said: “I am honoured and delighted to be appointed as Chairman of the University of Aberdeen Development Trust as it enters an exciting and ambitious new phase.  The recent £150 million Sixth Century Campaign was an astonishing success and the whole team at the Trust have a renewed vigour to build on this considerable achievement in the period ahead. Under the Principal, Sir Ian Diamond, there are many ambitious plans and projects to keep enhancing the University's reputation as one of the leading universities of the world and the tremendous support of so many generous individuals and organisations will really help to make the vision become a reality for the benefit of both the University and the City of Aberdeen."

University of Aberdeen Principal, Professor Sir Ian Diamond, added: “It is fantastic for the University that Mr Manson has been appointed Chairman of the Development Trust. He brings with him a wealth of expertise and experience, and I am sure he will be a tremendous asset.

“I would also like to take this opportunity to thank Lord Wilson, who as Chairman has helped the Development Trust to achieve so much success in recent years.”

The Development Trust, which is currently raising support towards a £60million fundraising target having already raised £35.7million, is confident that the appointment of Sandy will bring a renewed focus and drive to the Trustees and team.

The University of Aberdeen currently has a number of key priorities to deliver including developing and supporting students through scholarships and student societies, enabling global research in many fields including medicine and food and nutrition as well as working in partnership with Aberdeen City Council and sportscotland to provide the new aquatics centre which is due to open in 2014.  The Development Trust, which is a charity registered in Scotland, no. SC002938, aims to support these priorities while enabling the University to preserve its unique heritage, strengthen its links with the community of North Scotland and support the University’s commitment to internationalisation.

Support from the University’s worldwide family of alumni, friends and benefactors as well as companies, trusts and foundations ensures that many activities that benefit students are made possible which otherwise would not be achievable.  All the support received whether it is a £10 regular donation or a major gift helps to widen access to higher education and provide students with opportunities which greatly enhance their studies and learning experiences.

Anyone interested in finding out more about supporting the University of Aberdeen visit www.abdn.ac.uk/giving.