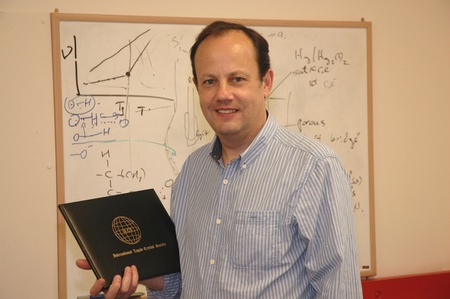 A University of Aberdeen scientist has been recognised for his outstanding and influential work in liquid crystal chemistry.

Professor Corrie Imrie from the School of Natural and Computing Sciences has been awarded the LG Display Award by the International Liquid Crystal Society. He is only the third recipient of the award, first given in 2008, and which recognises a cumulative body of research that has significantly impacted the liquid crystal field. The award’s sponsor, LG Displays, are the world’s largest liquid crystal displays manufacturer.

Professor Imrie accepted the award at a presentation ceremony at the International Liquid Crystal Society’s 24th biannual conference which took place in Mainz, Germany, and was attended by almost 900 delegates

He also delivered an invited award lecture at the conference, describing the recent discovery of a new type of liquid crystal phase.

Accepting the award Professor Imrie said: “I am honoured to receive this accolade and very grateful to the Honours and Awards Committee of the Society for considering me. This is a particularly exciting time to be involved with liquid crystal science and technology.

"Unbeknown to many, liquid crystals affect all our everyday lives: from the display devices on our phones, computers and televisions, through high performance polymers such as Kevlar, detergents and soaps, dyes, to flexible thermometers and sensors, more recently a wide range of biomedical applications have emerged including gene therapy, drugs and artificial membranes. Our work at the University involves the synthesis of novel liquid crystalline materials and studies of how their behaviour varies with temperature. We have recently focussed much of our activity on the design of new types of membranes for use in fuel cell technologies.”