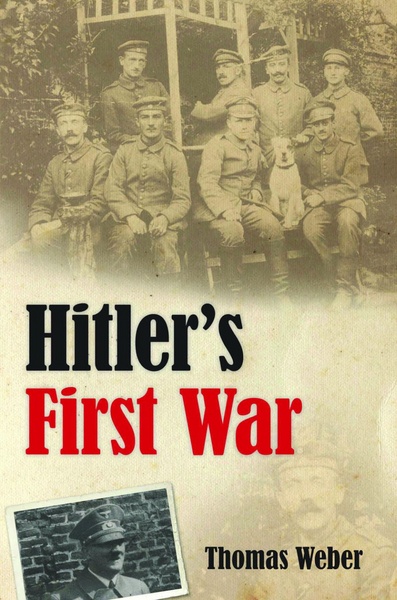 The research of University of Aberdeen academic Dr Thomas Weber will be brought to the screen by a team of award-winning German film-makers in an international TV series based on his book Hitler’s First War.

The English-language TV serial will be made by Nico Hofmann and Jan Mojto, and follows their worldwide hits including Dresden, Storm Tide!, Operation Valkyrie, Hindenburg and The Tower.

The announcement was made by managing directors of teamWorx Fernsehen & Film and EOS/Beta Film at the international TV trade fair MIPCOM taking place this week in Cannes.

The eight-episode series will be based on the biography of Adolf Hitler by renowned historian Thomas Weber, in which he vividly describes Hitler’s time as a soldier in World War I, and evaluates previously unexamined documents about the List Regiment, in which Hitler served.

Published in 2010, the documents triggered a new discussion about the interpretation of Hitler’s persona. Author and director is Niki Stein, whose latest film Rommel (also produced by teamWorx) attracted great public interest even before its first airing. The screenplay is being co-authored by Hark Bohm.

The series will begin with World War I in 1914 and end with Hitler’s death in 1945. By exposing key formative moments, turning points, and antagonists, the project also pinpoints certain revealing ‘leaps in radicalisation’ made by Hitler during the decisive phase of the preparations for the Holocaust.

“Even with all the previous attempts to shed light on the Third Reich, the war and the genocide, Hitler himself remains mysteriously vapid,” says Dr Weber, an acknowledged Hitler expert and scholar who works at the Universities of Aberdeen and Harvard, and will be historical adviser for the TV project.

“Our self-imposed benchmark for a new series on Hitler must be to change this,” he continues. “Only by taking Hitler’s skills of self-invention seriously, his talents and weaknesses, his undoubted personal charm as well as the social bonds he forged in the course of his very special path of life – if we do all this, and do it without stripping him of the tremendous impact he had on so many Germans, only then can we hope to get to the bottom of the eerie interplay between Hitler and the Germans.”

On the question of whether it is possible to treat Hitler in a fictional mode for television, Nico Hofmann commented: “We think it is, particularly after Joachim Fest’s Hitler biography and Oliver Hirschbiegel’s Downfall.  Thomas Weber’s detailed, well-founded research allows for a new, critical introspective look into Hitler’s psychological background and his evolution into a malevolent seducer.

“Precisely this seductiveness – which also reached into the bourgeois classes as well – is at the center of this eight-part serial concept that the award-winning filmmakers Niki Stein and Hark Bohm are currently writing. As with our Rommel production, the entire project will analytically reproduce the latest state of historical research. Ensuring this authenticity is not only our team of historical advisers, but foremost Thomas Weber’s book, which is widely seen by scholars as a milestone in the historical work on Hitler.”

In order to guarantee an interpretation of Hitler’s persona that is as inclusive as possible and that corresponds to the latest state of research, distinguished specialists will participate in developing the subject. In addition to the historians Thomas Weber and Ralf Georg Reuth, the film team will also be profiting from the expert advice of Jonathan Steinberg (University of Pennsylvania, Fellow of Cambridge University), the international expert on recent Jewish history.

Jan Mojto said: “With Nico Hofmann we now share twelve years of cooperation with almost 30 programs. Many of them were of sensitive nature and have turned out to be emotionally intriguing and historically acclaimed. Audiences today start to watch premium television in the series format and the series format allows to create a more complex world. I think the time is right to create a series on Hitler out of Germany in English for the international audience.”