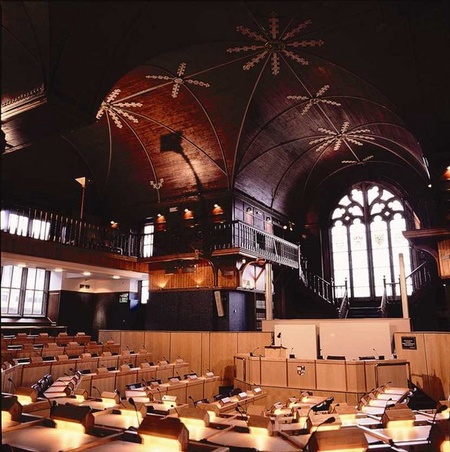 A unique partnership between the University of Aberdeen and one of the world's leading business schools has created a new programme of events starting autumn 2012, based on the theme of leadership.

The series will feature a Leadership Debate this November, in which a panel of successful leaders from diverse backgrounds will give their own perspectives on this most critical subject, and answer questions from an invited audience of senior members of Scotland’s business sector on the University’s King’s College campus.

The Henley-Aberdeen Partnership was launched last year as a network to deliver leadership development to those at the top of their organisations in Scotland.

It is based on the successful Henley model, and offers a range of masterclasses throughout the year, with the topics chosen by organisations participating in the partnership.

The partnership concept began in Henley in 1995 and now includes a network of organisations ranging from FTSE 100 companies to SMEs and those in the voluntary sector.

Professor Norman Hutchison, who is leading the partnership for Aberdeen, says leadership development has never been more important in the corporate world - but that many organisations have been forced to look south for delivery.

“We believe that we are the only programme in Scotland offering executive education of this kind,” he said.

“In a fast changing business environment, it is very difficult for senior executives to have all the answers to all the problems that they will face in the future with their current acumen and skill  set. The Henley-Aberdeen Partnership combines the delivery of high quality executive education from a recognised global leader with world leading academics and researchers to address the key issues confronting senior executives as they bid to grow and devlop their organisations.

“This all takes place in Aberdeen and we’ve had a very enthusiastic response from companies keen to take advantage of this opportunity in Scotland, particularly as organisations are becoming more aware of the need to cut their carbon footprint.

“For this coming season members told us they wanted to hear more about leadership, how leaders operate, and where their responsibilities lie. In light of this the Henley-Aberdeen Partnership is delighted to be hosting The Leadership Debate, in a ‘Question Time’ format which will bring together an esteemed panel of successful leaders from diverse backgrounds to answer questions on the ever prominent subject of Leadership.”

The Leadership Debate takes place on Thursday 1 November at 6.30pm in the King’s College Conference Centre. Panel members include Dr James Smith, who retired in April 2011 after seven years as Chairman of Shell UK, Brigadier George Lowder, commander of 51 (Scottish) Brigade who recently became Director of Defence Intelligence Fusion Centre (Afghanistan),  Professor Anne Glover, the first Chief Scientific Adviser for Scotland and now Chief Scientific Adviser to the European Commission, and Dr Lesley Sawers, the Chief Executive of The Scottish Council for Development and Industry. Chair for the debate will be Dr Peter Davis of Henley Business School.

The event is invitation only. However enquiries about places remaining and about the Henley-Aberdeen Partnership and programme for 2012/13 should be directed to Christina Blakey at the University of Aberdeen Business School on 01224 273721  email c.blakey@abdn.ac.uk

Full details of the Henley-Aberdeen Partnership, the programme for 2012/13, and the Annual Leadership Lecture (including biographies of the panel members), can be found at www.abdn.ac.uk/henley-aberdeen