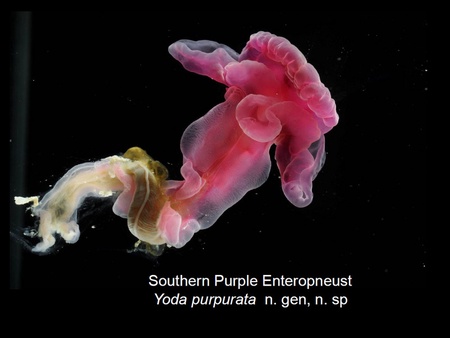 They may not be green but they do live in an ocean far, far away, and now they share the same moniker as the diminutive Jedi master in the Star Wars blockbusters.

Yoda  purpurata - to be exact - is the name now given by a University of Aberdeen-led team of scientists to one of three new species of deep sea acorn worms or Enteropneusts discovered 2,500m or around 1.5 miles below the surface of the Atlantic Ocean.

There is much interest in these deep sea hemichordates since they are close to the evolutionary link between vertebrates and invertebrates.

Researchers were completing the last leg of the £2m NERC-funded ECOMAR research programme examining the occurrence, distribution and ecology of animals along the Mid-Atlantic Ridge between Iceland and the Azores when they recovered the specimens two years ago during a voyage aboard the RSS James Cook.

Now, after studying the specimens, scientists have officially named the three new species identified as belonging to the Torquaratoridae family.

In a paper published in the journal Invertebrate Biology, the scientists - including Professor Monty Priede, Director of the University of Aberdeen’s Oceanlab, who led the research - reveal the new names.

A reddish-purple acorn worm with large lips either side of its head region reminded researchers of floppy-eared Star Wars character Yoda while pupurata is Latin for purple and describes its colourful hue.

Allapasus isidis is the name given to a white acorn worm which was named after the NERC-owned remotely operated vehicle, ROV Isis, which collected the specimens from the ocean.

Professor Monty Priede said: “It’s incredibly exciting to find new species and when we retrieved them back on board the ship  everyone was amazed at the striking differences in colour which led to nicknames such as ‘northern pink’, ‘southern purple’ and ‘southern white’ which captured their colour as well as where on the Mid-Atlantic Ridge they were found.

“Our colleague in California Nick Holland, the world authority on the Enteropneusts, chose the name Yoda, for the new genus characterised by its large ear-like lips.

“Shallow water acorn worms live in burrows and are rarely seen, whereas deep sea species browse on the sea floor leaving spiral poo traces that resemble crop circles.  These traces have been seen in fossil form but until recently no-one knew what produced them.

“It is only 10 years since the first species of deep sea  torquaratorid acorn worm was found in the Pacific Ocean; now we have three new species from the Atlantic it seems different species will be found throughout the deep sea.

“There is much interest in the acorn worms from the point of view of understanding the early evolution of the vertebrates. In particular the deep sea species show how a primitive animal with some chordate characteristics but no tail or limbs can drag itself across the sea floor using a muscular collar to gather food and then float above the sea floor to new feeding sites.

“Whilst they are not strictly a missing link in our own evolution they give an insight into what the lifestyle of our remote ancestors might have been like.

“Despite their recent discovery these animals are not rare in the deep, and now we have the technology we are finding them in abundance. The next question to be addressed is the role they play in the deep sea ecosystem.”