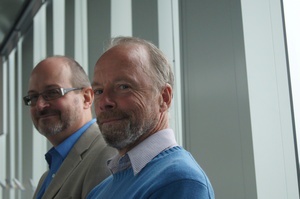 Environmental endocrine disruptors are man-made chemicals that have been shown to have adverse effects on animal and human health and fertility. Aberdeen scientists told the British Science Festival today (Wednesday September 5) their effects on ecosystems and human health could be as significant as climate change.

Research conducted by Professor Paul Fowler, Chair in Translational Medical Sciences, University of Aberdeen, and Dr Stewart Rhind, Research Scientist, James Hutton Institute in Aberdeen, along with other national and international collaborators, have shown an association between exposure to these disruptors and changes in the structure or function of testes, ovaries, parts of the brain, uterus, thyroid and adrenal gland of sheep foetuses.  In adult sheep changes have also been seen in bone structure, the testes and offspring behaviour.

Endocrine disruptors can be found in electrical equipment and furnishings (fire retardants), plastic bags and bottles, vehicle exhausts, adhesives, paints, man-made hormones and drugs (including the contraceptive pill and drugs to treat cancer and depression), and even “safe” drugs such as aspirin and paracetamol.  While individually these chemicals appear harmless, research suggests that when combined, as in real-life scenarios, they may work together to perturb animals and humans subsequently exposed.

Dr Rhind said: “These chemicals are in our air, soil and water. Some are fat soluble and may accumulate in our bodies while others are water soluble and end up passing through us and being flushed down our toilets, entering our environment where they may affect other animals or enter our food chain re-exposing humans.  Individual exposures differ - city dwellers have a higher exposure to chemicals in traffic fumes while country dwellers are more likely to have exposure to pesticides.

Professor Fowler said: “Many of the changes we see are very subtle and not apparent in the living animal; nevertheless, they may be associated with disruptions of many different physiological systems and increased incidences of diseases and reproductive deficiencies such as those that have been reported in a variety of species, including humans. Embryos, foetuses and young animals appear to be particularly vulnerable.

“It’s notable that incidences of breast and testicular cancer and of fertility problems in humans are increasing, while populations of animal groups as diverse as amphibians and honey bees are in decline.”

The Aberdeen researchers have reached their conclusions through studies of sheep maintained on pastures that have been treated with sewage sludge - solid waste derived from sewage processing plants - commonly used as fertiliser in the UK and many other countries.

Dr Rhind said: “We are using our sewage sheep studies as a tool to investigate the impact on physiological systems of long-term exposure, to low concentrations of mixtures of chemicals because in the real world that is what happens.

“One solution to the problems that these chemicals pose might be to simply stop using them. However we have to find a balance in order to tackle this problem.  If we were to remove all the things that we now use and which contain endocrine disruptors we would have to give up everything that was plastic. We would have to stop using fossil fuels and give up our cars, trains and planes. Life would be impossible – you would be back to the Stone Age, or before, and that’s not going to happen.

“So what we must do is attempt to identify the most critical disruptors and their impacts and we are beginning to do that in Aberdeen with our sewage sludge studies. We believe there should be a gradual reduction in the use of disruptors identified as being particularly problematic.

“We need to keep trying to reduce outputs from factories and from sewage processing; we need to educate people to minimise exposure, particularly the more vulnerable members of society, those yet to be born and those that are still young and developing; others may wish to avoid living in the city or not contribute to the pollutant burden by not flying.

“We can change our behaviour and influence manufacturers, eg when we go to supermarket we can choose personal products that are parabens or phthalate free and avoid drinking from plastic bottles – if everyone modified their purchasing behaviour, manufacturers would rapidly change their products to meet demand.

“If we do nothing, endocrine disruptors may not only impact on human health but all the ecosystems including those on which we depend – if we compromise soil productivity and sustainability of our agricultural systems or cause imbalance in marine and freshwater ecosystems through damage to populations of top predators, ultimately, we threaten our own survival.”